How compatible are Pisces women and Capricorn men mentally, emotionally and sexually? While the Pisces woman and  Capricorn man are close in the zodiac, this often means they are not well suited for each other. The female fish is gentle and emotional while the male goat is stern and rational. But put them together and you get a complementary match.

First, though, the water sign Pisces has to meet the earth sign Capricorn, which will prove difficult considering they are both introverts. Neither one likes to go out and socialize, so the Pisces and Capricorn will most likely be introduced through friends or perhaps business dealings.

But they will immediately recognize all of the simple things they have in common. The Pisces women and Capricorn men are both homebodies who would rather enjoy each other’s company in a cozy house than spend a night out on the town. And both sun signs take their time when making decisions, sharing a cautious nature.

They want to take things slow and careful when building their relationship, and this mutual understanding strengthens their love compatibility.

And while the Pisces woman can be more emotional than he is, the Capricorn man is patient enough to work through her feelings with her. Because of this give and take they develop with each other, they will eventually decide to move things into the bedroom.

The Capricorn male will most likely take control of the situation between the sheets, which she has no problem with. But he will have to put as much effort into making her happy as he does his career if he wants to keep his gentle lover. And the Pisces female will have to reassure him that even though she may come off as detached during their sexual union, she is devoted only to him.

This will help to keep things balanced outside the bedroom as well, for his loyalty matches hers. Because the Pisces woman Capricorn man couple are so dedicated to their partner, they are able to utilize their individual strengths and work through their weaknesses.

The Pisces woman doesn’t care about household responsibilities, and he will automatically step up and handle all of their affairs. And while the Capricorn man is driven and ambitious, she offers him dreams and goals he never would have conceived of by himself. 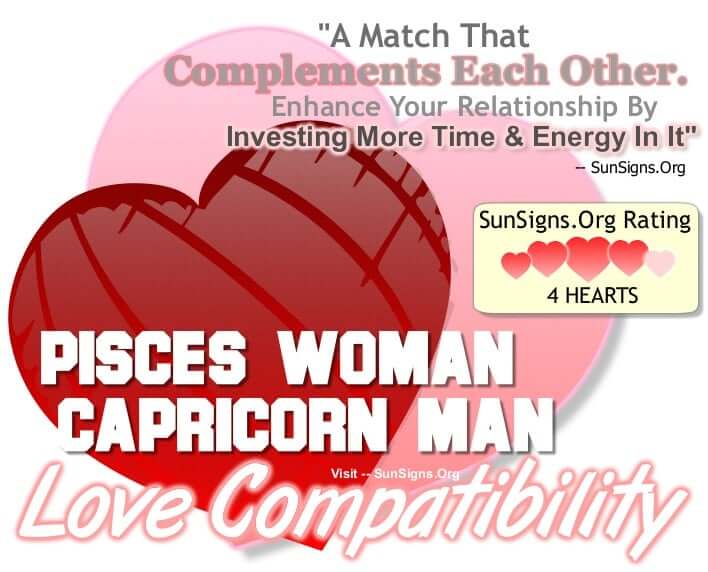 The Capricorn man is steady and grounded in his lovemaking and she is dreamy with her head in the clouds. While the Pisces woman loves fantasy and role playing he couldn’t care less about such frivolous ideas. He has his tried and true method, and while she is usually the slower of the two sexual partners she may actually grow bored with his repeated technique.

The Capricorn male will have to learn to loosen up and live in the moment with her if he is to join in her spiritual experience. And the Pisces female will have to come back to earth and revel in his solid physical pleasures to complete his satisfaction.

When the pitfalls arise he will come down hard on her and she will swim beneath the surface until the coast is clear. The Pisces woman will have to learn to stand up for herself and he will have to tone down the harsh words that upset her delicate nature. But if the Capricorn man can teach her initiative and she can help to calm him down after a stressful day, they will maintain a wonderfully peaceful existence throughout their life together.

Pisces is a mutable water sign whereas Capricorn is a cardinal earth sign, the Pisces woman Capricorn man compatibility gets a FOUR Hearts rating. Together the Pisces Capricorn match can enhance their relationship by keeping an open mind and learning from their mate’s better qualities.