Pisces Woman And Aquarius Man – A Couple With Different Thinking

How compatible are Pisces women and Aquarius men mentally, emotionally and sexually? While the Pisces woman and Aquarius man share a desire to understand the world around them, they approach it from different angles. The female fish feels things deeply and the male water bearer thinks of things on a higher plain. But sometimes the two sun signs can find middle ground in their love compatibility.

If the Pisces woman meets the Aquarius man it’s because he makes the first move. He is a social creature who wants to talk to everyone about their ideas and opinions. He loves a good debate and likes to bounce theories off of anyone who will listen. When he sees her standing by herself he wants to know more about her and why she isn’t with the rest of the group.

Once they start talking, the Aquarius male realizes she is more demure and subdued than he is, but her still waters run deep. He recognizes she is a dreamer and looks at the bigger picture in an abstract manner, and she can see he is more analytical. Through her incredible intuition the Pisces female knows he favors reason.

But he also has a unique perspective on issues that surprises people. Because the Pisces and Aquarius zodiac signs have the same desire to come to a greater understanding of the world, she eventually decides to take the relationship into the bedroom.

She knows what he wants and will try to please him, and he will go out of his way to shower her with unconventional gestures of affection. Because of their shared loyalty, they will find a way to make this relationship work.

And this is true outside the bedroom as well. They combine her philosophical nature with his inventive ideas and are able to go further than either one could go alone. And because she can go with the flow that allows him to fly off and pursue his dreams. With her by his side, the Pisces woman Aquarius man match can go the distance. 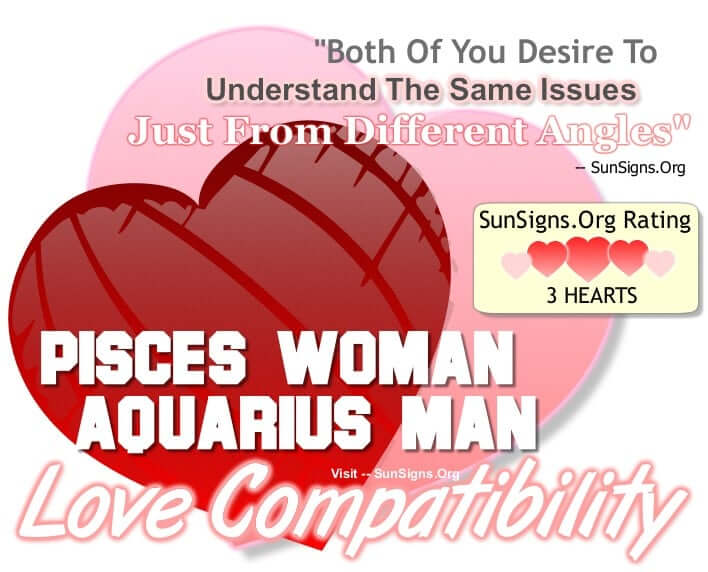 Sex is where the differences between the Pisces female and Aquarius male make an appearance, because she feels their lovemaking on an emotional level and he experiences it on a mental one. While they both enjoy fantasy and role playing, he needs more cerebral stimulation than that.

The Pisces woman has her head in the clouds with him, but she sees a movie playing in her head and the Aquarius man needs more attention to their sexual union. The funny thing is, both zodiac signs can come off as aloof or detached during sex, and they will have to work to focus on each other between the sheets.

The only major problem that can arise is when they have household responsibilities to handle. Neither the Pisces women nor  Aquarius men are particularly good at completing the mundane duties of day-to-day living. They will either have to share the obligations or decide who will take care of such things.

This can create tension between them, and he can be overbearing in his arguments with her. This will cause her to swim beneath the surface and stay there until the coast is clear. He may go ahead and make decisions without her, and she might not object since she doesn’t care about dominance.

But she will have to learn to stand up for herself if she disagrees with him, and he will have to be careful to keep from offending her sensitive manner.

Pisces is a mutable water sign whereas Aquarius is a fixed air sign, the Pisces woman Aquarius man compatibility gets a THREE Hearts rating. The Pisces Aquarius match can both offer their good qualities of emotional depth and rational thought to create a more complete relationship if they’re willing to keep an open mind.