How compatible are Pisces women and Libra men mentally, emotionally and sexually? While it may not be clear at first, the Pisces woman and Libra man do share some things in common. They both work hard to maintain harmony in their relationship, and they enjoy the same romantic courtship. They just have to be careful in how they manage daily responsibilities.

When these two sun signs meet, the male scale will most likely make the first move for he is the social butterfly. The female fish is more of an introvert, who would rather observe the crowd than be a part of it. But the Libra man wants everyone to have a good time so he includes her in the conversation.

And when they start talking, he discovers a wonderful world of beauty and lofty goals that the Pisces woman has created for herself and others around her.

He enjoys beautiful things, and she provides him with a magical place to keep them. She, in turn, appreciates his openness to such a dream state, even though he’s clearly a more logical person than she is.

With her intuitive nature, Pisces women can see how analytical Libra men are, always looking at both sides of a debate. And she welcomes his rational thought process because it means he takes his time in making decisions. Because the Pisces and Libra both like to take things slow, they will agree on when to move the relationship into the bedroom.

And this is where they really connect, for the Pisces woman loves the sweet and romantic gestures from her Libra lover. He is soft and affectionate which satisfies her emotional needs, and he is never too intense or overbearing. She shares in his love of fantasies and adds a few of her own. And they get lost in the shared sensuality of their lovemaking, enjoying the tenderness of their partner.

Both sun signs are fiercely devoted to each other. And it’s this kind of loyalty that will help them outside the bedroom as well. The Pisces Libra match can combine their differences to their advantage. She comes up with grand dreams and goals for them to achieve and he puts them in motion. His work ethic is strong, so he’s able to provide a stable and cozy household for the two of them. 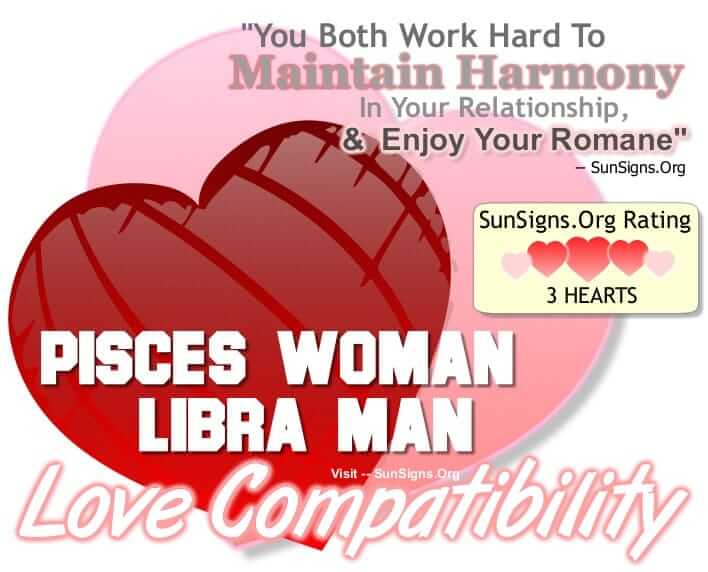 The only thing that can get in the way of a more perfect union is the different way the Pisces woman Libra man couple experience their time between the sheets. She feels things on an emotional level and he sees it on a mental one. Because she gets so lost in the clouds she may come off as detached, and he will think there is a problem.

The Libra male will try to find a way to fix it, when there’s nothing to fix. The Pisces female will have to reassure him of her fidelity, and bring herself down to his cerebral plain. And he will have to soar through the clouds for the more spiritual experience.

The only thing the Pisces woman and Libra man will have to watch out that can spoil their love compatibility is their finances. The Pisces female is not great with money and he likes to buy lavish gifts.

And if they have to decide who takes over that responsibility, it will take the Libra man a long time to figure that out, if he does at all. This is where she may have to step in and make a firm choice, and she’s not comfortable with that. This will bring about conflict which they will have to resolve somehow.

Pisces is a mutable water sign whereas Libra is a cardinal sign, the Pisces woman Libra man compatibility gets a THREE Hearts rating. If the Pisces and Libra zodiac signs can focus on their strengths, this couple will remain loyal to each other forever.