The gargantuan buffalo commands attention in both the physical and spiritual realms.

Weighing in at over a ton, its presence is unarguably a strong one. In addition to being a reminder of the big picture in life, this mammoth of a beast offers a range of spiritual symbolism to humans, who appear to be mere ants in its shadow.


Among others, the buffalo animal totem symbolizes abundance, power, stability, pattern, gratitude and consistency. Several cultures consider it to be one of the most sacred creature, as well, leading its presence to be deemed a blessing. If you are graced with visions of the buffalo symbol, whether in your mind or in actuality, you can be sure that prosperity will follow shortly thereafter.

In one way or another, we are always provided for. This is a fact that sometimes seems untrue or in congruent with the current state of our affairs. Sighting a herd of buffalo, a natural sign of abundance in the wild, is a strong symbolic occurrence and one that should not be ignored.

We often take the abundances that we have for granted, writing them off as insufficient. Each of our individual attitudes regarding this matter affects the rest of the world around us, making it crucial that we embrace a positive, grateful stand point.


The buffalo animal totem reminds us that we must express our gratitude in all matters, appreciating every part of creation. Demonstrating our thanks is a symbolic form of prayer and praise to the Earth for providing us with all of the tools that we need to survive.

We are also given endless amounts of gifts that manifest themselves in the form of both luxuries and simple daily joys. The combination of all that we are given is what enables all creatures of the world to live in harmony, as long as we are humble enough to accept them. 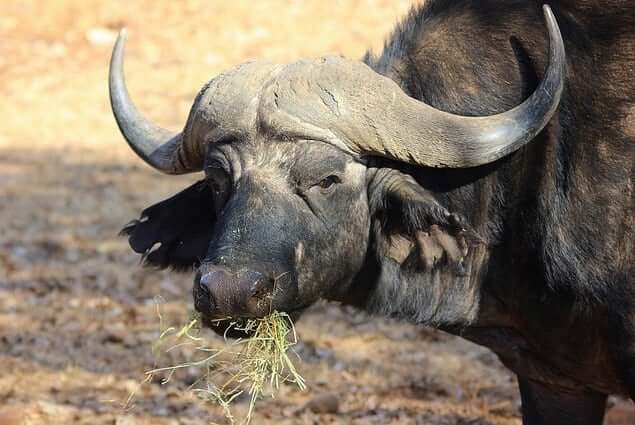 Like all other spiritual animal totems, the buffalo may choose to bind itself to certain types of individuals. However, it is not mutually exclusive. It honors every aspect of life and is unpretentious enough to associate with every individual, as long as you adopt its spiritual messages accordingly.

The buffalo values life and all of its intricacies. In order to revere this in the same manner, the buffalo symbol tells us that we must walk along a sacred path through life, taking nothing for granted and celebrating even the most minute of details.

This creature seeks to assist others in establishing a deep relationship with the Earth and all of its fellow creatures residing here.

It is not an arrogant animal and considers itself supreme to no one. All life is valuable to the immense buffalo.

As a great protector, the buffalo meaning calls on us to help the weak and endangered species of our planet. It represents a certain strength of character necessary for fighting the good fight, but also celebrates the meek.

Although they are mammoth in size and are thus presumed to be aggressors, buffalo’s are one of the gentle giants of nature and encourage to neither push nor force our will; rather, they want us to take the easiest and most non-conflictual path in our quest for the greater good.

Throughout history, the buffalo was a prey of hunters who could not (or would not) recognize its peaceful virtues. Because of its need to persevere through those unfortunate times, it has evolved into a symbol of endurance, strength, and authority. These particular traits are conveyed by its bodily appearance as well as its presence in our dreams.

If a buffalo stampedes into your dreaming unconscious, it may be trying to transmit a warning that you must exercise caution in your immediate life. Perhaps you are deviating from the correct and just path that you have been traveling down, and it seeks to reintegrate you with your true course.

This is particularly relevant in the case of an injured or killed buffalo, which serves to forewarn you of new ventures off of your path that you are considering in the near future. Slow down and carefully think through any new endeavors that you are currently or are thinking about undertaking, as they could divert your from the righteous path.

Alternatively, dreams featuring buffaloes are symbolic of your familial heritage and roots. A white buffalo is of notable significance, signifying that your innermost desires and wishes can and will soon be fulfilled.

Share
Previous Are You Competing With Her Ex? 6 Signs She’s Still Pining for Him
Next Armadillo Animal Totem Symbolism & Meanings