Pisces Woman And Aries Man – A Match With Little In Common

How compatible are Pisces women and Aries men mentally, emotionally and sexually? Some see the pairing of the Pisces woman and Aries man and wonder what they have in common. But it’s more about the complementary personalities of the female fish and the male ram that bring them together. The Pisces and Aries match do run into problems, but they can also help each other.

The Pisces woman doesn’t always come across the Aries man, for she is a homebody and he’s more of an adventurer. If they do meet, he’ll make the first move as the extrovert. He sees her delicate beauty and understated grace and wants to see if there’s anything more under the surface. And once he strikes up a conversation with her, she is fascinated by his confidence and outgoing nature.

The Aries male is witty and flirtatious and she’s able to keep up with him through her powers of intuition. She knows what makes him tick and she responds in kind. He likes having her undivided attention, as it feeds into his ego, and the Pisces female finds him funny and charming.

While the Pisces woman is more of a dreamer and he’s more of a doer. He is also a strong male archetype who wants to protect her from the harsh realities of the world. Because of this attraction between the two sun signs, she will eventually allow him to move their relationship into the bedroom.

Her emotional depth is overwhelming. But the Aries man’s physical prowess rolls over her deep spiritual experience, and she can drown in his passionate embrace.

The Pisces woman can help him to slow down and organize his thoughts before barreling into a situation without thinking about the consequences. He can teach her confidence and she can teach him patience if both the Pisces and Aries are willing to learn. The love combustibility in this relationship might not be much but it can be improved with some understanding. 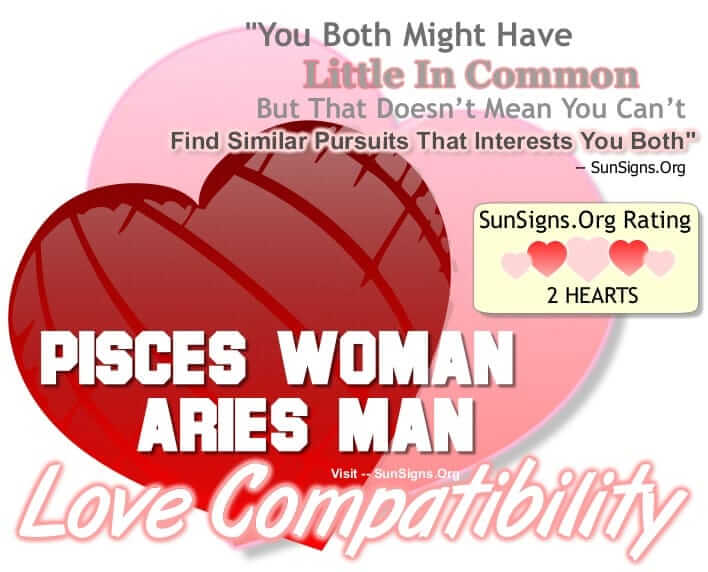 Differences in matters of sex may hinder the development of the Pisces woman Aries man partnership, for the water sign Pisces experiences their lovemaking on an emotional plain and the fire sign Aries enjoys it on a physical level. He’s much more lustful and passionate than she is, and his primal urges can be overbearing for her gentler touch.

The Pisces woman is soft and romantic, which can get things started for them between the sheets, but he will want to take over as the more dominant partner. He will have to learn to dial it back a bit, and she will have to try and step up her game if they are to find a mutually gratifying sexual union.

And this is true for outside the bedroom as well, for the Aries man is bold and brash while she is quiet and demure. While he admires her creativity and life goals, the Pisces woman doesn’t possess the same kind of drive he does.

He never hesitates to go after what he wants, and can help her to achieve her goals if she could learn the same ambition. Otherwise, he will take over the reins in this partnership and leave her swimming alone.

Pisces is a mutable water sign whereas Aries is a cardinal fire sign, the Pisces woman Aries man compatibility gets a TWO Hearts rating. If he can learn to trust and respect her wishes, she will give him dreams and ambitions he never would have thought of on his own. And once he sets them in motion, this Pisces Aries couple will go the distance!