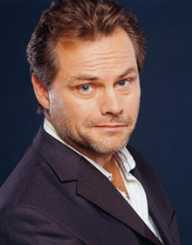 “Jack” Dee; James Andrew Innes nicknamed ‘The Midget with the Widget’, is popularly known for his straight-faced humor, wit, and sarcasm. Jack is an award-winning British-standup comedian famously known for his role in the sit-com series ‘Lead Balloon’ where he starred and co-wrote the comedy series.

Jack Dee, was born on 29th September 1961, in Bromley, Kent, England to Geoffery T. Dee, a painter and Rosemary A. Jack has two siblings, Joanna Innes Dee and David Simon Innes Dee. He was raised in Petts Wood and afterward, he relocated with his parents to Winchester.

Jack's first school was The Pilgrims' School, an independent school in Winchester. He then attended Montgomery of Alamein High school. He also studied at Frensham Heights School for some period.

Jack Dee then attended Peter Symonds’ College where he pursued his A levels. His school grades averaged to D and F. As a result of this, he opted to go to a drama college, but his mother was not in favor of it, therefore, she advised him to pursue a vocation. He, therefore, pursued a career in the catering industry where he ended up as a chef.

In 1986, Jack Dee made his ever first public appearance at an open-mic gig at The Comedy Store’, a comedy club located in Soho, England. Since the 1990s, Jack has continued performing at a number of venues including the Hammersmith Apollo and the London Palladium.

In 1991, he won the Best Stage Newcomer a British Comedy Award. He was ‘The Jack Dee Show’, his very own show which aired in February 1992 on channel 4. This provided a platform exposing him to a vast range of audiences which resulted in more stand-up shows on TV. Jack Dee’s ‘Saturday Night on ITV’, ‘Happy Hour’ (1997) and ‘Jack Dee Live’ at the Apollo in 2004 aired on BBC One. The Program was performed at the Hammersmith Apollo Theatre, London.

In 1996, Jack Dee featured in a mockumentary series together with Jeremy Hardy in ‘Jack and Jeremy’s Real Lives’. The show was aired on channel 4. This show didn’t attract enough views and therefore was later aired at midnight. He further went on and made his debut starring in various television shows such as, ‘Dalziel’, ‘Silent Witness’, ‘Pascoe’ and Jonathan Creek’.

In 2001, Jack Dee won the ‘Celebrity Big Brother’, a British reality TV show. Later, he was not happy about how the housemates were treated to date and refused to sign permission rights for the episodes to be aired. In 2004, he played a role in ‘The Deputy’ as ‘Steven Charles MP’. Later that year, he starred in ‘Tunnel of Love’, a comedy/ drama piece alongside Christian Solimeno and Mark Heap.

In February 2009, Dee was the hosts of the summer series of ‘I’m Sorry I Haven't a Clue’, and replaced Humphrey Lyttelton. That same year, he also made appearances on the TV comedy panel game, ‘Shooting Stars’ and The News at Bedtime’.

In 2013, he took part in a ‘Comic Relief Challenge’ alongside Greg James, Chelsee Healey, Philips Idowu and Dara Ó Brian. The challenge dubbed ‘Through Hell and High Water’, entailed British celebrities canoeing through the rough waters of Zambezi River. They were able to raise approximately £1 Million for charity.

While working at the Ritz, Jack commenced drinking heavily. He also attempted being a priest but later on realized that it wasn’t for him and gave it up. Dee was the face of an advertising campaign for ‘John Smith’s Bitter’. The campaign was a widget that on a continual basis re-carbonated the drink inside, hence his famous nickname: “The Midget with the Widget”.

In 2009, Jack Dee published his autobiography titled, ‘Thanks for Nothing; The Jack Dee Memoirs’. In the same year, Dee alongside other celebrities composed an open letter to ‘The Times’, expressing their support to the ‘Bahai’ leader facing trial in Iran.

Jack Dee has reportedly been suffering from depression. He claims that his work is the best therapy for his condition.

During the British Reality Show Big Brother’, Jack Dee escaped off a stage to kiss his wife for a brief moment. During the same show, he wore a tweed Scotland jacket and a cap during the eviction ceremony. He was holding his packed suitcase in hopes of being evicted out.