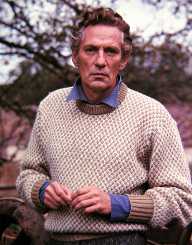 Frederick George Peter Ingle Finch was born on September 28, 1916, in London, England. His stepfather George Finch came from New South Wales in Australia and studied in Paris and Zurich. He married Alicia Gladys Fisher. His father served in the First World War. Finch considered George to be his father until he learned the truth in his mid-40s. His biological father was Wentworth Edward Dallas Campbell, who his mother had an affair with. Alicia married Campbell in 1922.

After the divorce, George won the custody of then two-year-old Peter, and he was raised by his grandmother Laura Finch in Vaucresson, France. In 1925, Laura and Peter traveled to Advar in India. The two lived several months in a Buddhist monastery. In 1926, he went to Australia to live with his great-uncle Edward Finch in Sydney. He attended the North Sydney Intermediate High School.

After graduating from high school, Peter Finch began working as a copy boy for the newspaper Sydney Sun. He later started writing, however, during this time he grew interested in acting. His first stage appearance was in the 1933 play Caprice at the Repertory Theatre. In 1934 and 1935, Finch appeared in several productions at the Savoy Theatre and worked as the sideshow at the Sydney Royal Easter Show. He also worked in vaudeville and traveled Australia with George Sorlie’s traveling troupe. He also began working on the radio and was coached by Lawrence Cecil throughout 1939.

Finch first appeared on the screen in the 1935 film The Magic Shoes, an adaptation of Cinderella. In 1938, he starred in Dad and Dave Come to Town, a role which was positively received by the critics. After this role, he was cast in Mr. Chedworth Steps Out. In 1941, Finch enlisted in the Australian Army and served in the Middle East as an anti-aircraft gunner.

During his service, Peter Finch was given leaves to act in radio, television, and film, since he appeared in several propaganda films. The most popular movies from this time was Another Threshold, These Stares Are Mine and While There is Still Time. In 1945, he produced and performed the Army Concert Party and toured bases with his plays French Without Tears and While the Sun Shines. In 1945, he was discharged from the army.

After being discharged from the army, Peter Finch continued his work on the radio and became one of Australia’s leading actors in the field. In 1946, he co-founded the Mercury Theatre Company and ran a theatre school. During late 1940, Finch appeared in films Eureka Stockade, and A Son is Born. When Laurence Olivier and Vivien Leigh toured Australia, they attended The Imaginary Invalid at the Mercury Theatre. Olivier was impressed by the production and encouraged Finch to move to London.

In 1948, Peter Finch arrived in England and received a contract with the help of Olivier. He was cast in the play Daphne Laureola and immediately established his name in London. The following year, he was cast in the British movie Train of Events. He continued to appear in several theatre productions. He was close friends with Olivier and his family but developed an affair with Olivier’s wife Leigh, which continued for many years. Although he was successful on the stage, Finch was suffering from stage fright and began to take more film roles during the 1950s.

Throughout the 1950s, Peter Finch's prestige began to raise. He was cast in the 1952 film The Story of Robin Hood and His Merrie Men, and the following year, he starred in The Story of Gilbert and Sullivan and The Heart of the Matter. In 1954, he starred in one of his most acclaimed film parts in Father Brown. Finch’s first Hollywood movie was Elephant Walk in 1954. When his contract with Olivier expired, Finch signed with the Rank Organisation for £87,500. His early roles with the Rank was Make Me an Offer, Simon and Laura and Josephine and Men.

In 1956, Finch was cast in the film A Town Like Alice, which became the third most successful film of the year in British box office. For the role, Finch received the BAFTA for Best Actor. His next successful part was in The Battle of the River Plate. In 1957 he returned to Australia to star in The Shiralee and Robbery Under Arms. In 1959, Finch starred alongside Audrey Hepburn in The Nun’s Story. The film was a significant box office and critical success. In 1960, Finch starred in The Trials of Oscar Wilde, which earned him another BAFTA.

In 1960, Peter Finch wrote and directed the short film The Day, which won him several awards. During the early 1960s, he starred in several Hollywood films, like The Sins of Rachel Cade, I Thank A Fool and In the Cool of the Day. His reputation began to increase after he starred in the British films The Pumpkin Eater and Girl with Green Eyes. In 1966, Finch starred together with Sophia Loren in Judith, and Melina Mercouri at 10:30 P.M. Summer.

In 1971, Ian Bannen dropped out of the new project Sunday Bloody Sunday, and Finch was awarded the lead role. This role won him another BAFTA for Best Actor, and he was also nominated for Academy Award. In the following years, Finch starred in Something to Hide, Bequest to the Nation and England Made Me.

Bassey has a daughter, Samantha, who was born in 1963. At the time, she was married to the openly gay film producer Kenneth Hume, who believed that Samantha was Finch’s biological daughter. His third marriage was to Mavis Barret, with whom he had a daughter, Diana.

In 1977, Finch embarked on a tour to promote his film Network. On January 13, he appeared on The Tonight Show with Johnny Carson, and the next day he suffered a heart attack. Finch died from the heart attack, at the time being 60 years old.