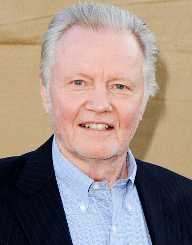 As a child, Jon was raised in the Catholic way and went to Archbishop Stepinac high school. While he was here, he discovered his interest and love for acting. During the school's annual musical festival, he played the comedic role of `count Pepi de loop.' Voight graduated in 1968 and enrolled at the Catholic University of America in Washington DC. Here, he majored in art and completed his degree in the year 1960.

Jon Voight’s initial years were not easy. After graduation in 1960, he moved to New York City in search of green pastures in his acting aspirations. His first job was on television between 1962 and 1966. He acted in a TV series `gunsmoke' and had guest appearances on various other movies. In 1965, he kick-started his theater career and enjoyed a stint on Broadway. Theatre was a door opener for film, and he shortly made his first movie appearance in 1967.

At this time, Jon landed a couple of roles in movies, and his career was picking quite well. In 1969, he was cast in the award-winning film `midnight cowboy'. The film enjoyed a fair share of success and controversies and was released with an X rating. This movie was a critical foundation layer to his career as he was nominated for best actor.

Jon Voight made appearances in various films, i.e., catch-22, deliverance among others between 1970 and 1972. The films received major acclaims and gained popularity with audiences. Voight was very active in the seventies in several films. In 1978, he played a role in the film ‘coming home’ as a paraplegic Vietnam War veteran. Due to this, he won the best actor award at Cannes film festival.

Shortly after that, Jon also featured in `the champ' which enjoyed great international success despite being unfamiliar with American audiences. In the 80`s, Voight went for a couple of years without acting in a notable movie, and his career slowed down a bit. However, in 1985, he starred in `runaway train.' It was a major hit, and due to his performances, he won the best actor award by the golden globe.

In 1991, Jon Voight became active on television and made his first T.V movie acting debut. The movie was called ` the final warning.' During the decade, he alternated between these television movies and feature films. 1n 1996, he co-starred in the blockbuster film ‘mission impossible’ with actor Tom Cruise. However, he had a bad following year after being nominated for the worst actor by Razzie awards. This was due to appearances in films `anaconda' and `most wanted.'

However, Jon continued being active and appeared in many movies and T.V movies, including Noah Ark. In the 2000's his acting career saw a resurgence with significant success in T.V series and movies. In 2001, he joined TV film `Uprising,' a movie based on uprisings in the ghetto. Due to this, he received an outstanding supporting actor in a limited series or movie award nomination by primetime Emmy.

During the same, Jon Voight was offered a supporting role in the film `Ali`' which starred will smith. It was a big hit, and for his performances, Voight received an Academy nomination award for best actor in supporting role. This was his fourth Academy Award nomination.

In 2003, he featured in many movies, including Pope John Paul II and Transformers. He also starred in the seventh season of famous series 24 in 2009. Quite recently in 2013, Voight has acted in movie Ray Donovan. He received a golden globe award for best-supporting actor-series, miniseries or television.

Jon Voight usually has political interests and liberal views and never shies away from letting the public know about them. Here is an example of some of them

Early in the day, he was a big supporter of President John F Kennedy whose death came as a massive blow to him

He actively protested against war in Vietnam

In an interview in 2007, Voight made his views clear about George W Bush criticisms

Hosted a Republican congressional fundraiser on June 8, 2009, where he made a speech criticizing President Barack Obama.

He had Washington Times publish his open letter to the president who was Obama then, accusing him of lying and promotion of anti-sentiments.

He openly supported Donald Trump on March 9, 2016, for party nominations. He also released a video to the same effect.

Jon Voight was first married in 1962 to actress Lauri Peters. However, the marriage did not last and ended in 1967. He remarried in 1971 to actress Marcheline Bertrand. The couple had two children James Haven and Angelina Jolie who went on to have significant successful lives in Hollywood. Voight and Marcheline, however, got divorced in 1980.

Jon Voight featured in the biographical sports drama film `Ali.' This film was based on the real-life story of legendary boxer Muhammad Ali. In the film, he played the role of Howard Cosell, who was an American sports journalist. For his performances, he received the best actor in supporting role award.

Jon Voight’s role as Luke Martin in the drama film ‘Coming Home’ too was excellent. Luke was a paralyzed war veteran from Vietnam. This is one of his memorable roles as he poignantly portrayed the traumatized war veteran who engaged in a romantic affair with a married woman. This not only earned him Academy Awards but several accolades.