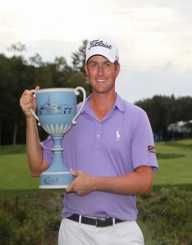 Webb Simpson is an American golfer with a successful record as an amateur and professional competitor.

Webb Simpson, the official name James Frederick Webb Simpson was born in Raleigh, North Carolina on August 8, 1985. The fifth child in the family of six children, he is the son of Evander Samuel and Debbie Webb Simpson. He went to Needham B. Broughton High School in Raleigh. He is a graduate of Wake Forest University.

He became interested in playing golf while still in junior school. His father introduced him to the sport. His father never played in any competitive tournament even as an amateur. Simpson took an immense interest in the sport and developed a yearning of professionalism. He spent most of his free time playing golf in high school. He competed in amateur tournaments and secured a sports scholarship to college.

He turned professional in 2008 after two wins with the US team in the Walker Cup and the Palmer Cup tournaments in 2007. From 2008 to 2010, Simpson competed with the US team in two tours and several classics. In 2008, he went with US team in the Professional Golf Association or PGA and Nationwide Tours. He finished in the second position in two outings of the Nationwide Tour. In 2009, he finished a dismal ninth in the Hawaii Sony Open and Bob Hope Classics. He appeared on the Barclays Open Classic and faired dismally. He came in at the number 70 on the global list of professional golfers ranking.

In 2010, Simpson hit a low note on the golf course. Unlike the previous season where he finished nine times in the top ten in the tour, Simpson managed only two top ten finishes during the 2010 season. As a result of the poor performance, he got the 94th ranking at the end of the tour season. In 2011 he won his first PGA Tour of his professional career. After the win at the Transitions Championships, Simpson faltered in the next few outings. He however recovered in Zurich Classic in New Orleans. He came in second to the title after Bubba Watson. He then slumped to the 14th position in the US Open in June 2011.

In August 2011 he won the title in the Wyndham Championship in North Carolina. He took the overall PGA Tour title in September after his win in the Deutsche Bank Championship. He went into the BMW Championship and finished fifth. By the end of the tour, Simpson ranked 22nd out of 30 golfers in the championship. He finished the season in the second position in PGA rankings.

Simpson repeated his heroics in the year 2012. He started the year with an impressive third at the Hyundai Tournament. He managed a top ten finish in two successive tournaments at the Waste Management Phoenix Open and Transitions Championships. He got the fourth position in the Wells Fargo Championship.

In the 2012 US Open in San Francisco, Simpson recorded an impressive win in June at the Olympic Club. He finished the tournament on a high note. He appeared in several tournaments before making it in the US team to the Ryder Cup.

The year 2013 had mixed fortunes for Simpson. He lost in the playoffs of the RBC Heritage tournament. He ended up in the fourth overall position in the championship. Despite the setbacks in the year, Simpson became part of the victorious US team that won the Presidents Cup in Ohio. In 2014 he went to Las Vegas and won the Shriners Hospitals for Children Open Championship. He made it to the US Ryder Cup team for the 2014 tour.

Simpson got his first winless season in 2015. He appeared in several championships and had his best in the second position at the Wells Fargo Championship. He missed out on the US team for the first time in five years. He never competed again until 2018. He won the Players Championship, his first win since 2014. He was selected to the US Ryder Cup team. The team lost to their European counterparts in the 2018 Tour. In his career until 2018, Simpson has six amateur titles and five PGA Tour wins with the US team.

In 2018, Simpson became the second most expensive golf player after winning USD 1.98 million in the Players Championship.

Simpson is married to actress Taylor Dowd. They got married on January 2, 2010. Together, Simpson and Taylor have four children namely James, Willow, Wyndham and Mercy.

Simpson met his future wife through his father. His father played the matchmaker after allegedly paying Taylor to go out with his son. The two got together and their friendship blossomed. However, none of the two has admitted to the payment of money in the date fixing by the Simpson patriarch.

Simpson still remains one of the golf players in the US to have represented the country both as an amateur and professional. He won tournament titles in both categories leaving a record to be envied by his peers and emulated by his juniors in the game.

He gives credit to God and his late father for the success in his life both in and out of the golf course. He is involved in various philanthropic activities in the US.