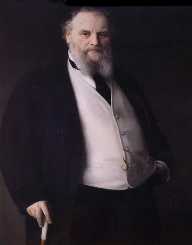 Alexander Turney Stewart was an Irish business entrepreneur who is best known for his great wealth, his innovation in mail order retail and owning the largest retail store in the world at the time.

Alexander Turney Stewart was born on 12 October 1803 in Lisburn, Ulster, Northern Ireland. His parents were both from Scottish Protestant families. His father, a farmer, died less than a month after Stewart’s birth of tuberculosis. His mother remarried and moved to America. Stewart was left in the care of his grandfather, John Torney. His grandfather wished Stewart to become an Anglican minister. He received both primary and secondary education. His grandfather died in 1816 and Stewart was taken in by Thomas Lambe, a local Quaker. He continued his education at the Belfast Academical Institution. Upon the completion of his education, he began working as a bag boy at grocers and contacted his mother about moving to America.

In 1818, with five hundred pounds earned Stewart headed for New York. There he began working as a tutor and joined an Episcopalian church. Sometime between reaching New York and 1822, Stewart returned to Ireland to claim the inheritance left to him by his grandfather once he had come of age. It is estimated that Stewart was left in the region of ten thousand pounds by his grandfather.

Alexander Turney Stewart returned to America in 1823 and opened a store on Broadway which sold Irish fabrics. The position of his store was some distance away from the established fabric thoroughfare in Pearl Street. Stewart felt his ability to sell wholesale at a cheaper price would see him attract customers rather than the location. So confident was Stewart that he did not undertake any advertising until 1831. Stewart focussed on customer service and ensuring as many customers as possible became repeat buyers. In 1846, Stewart decided to expand, and construction began on his famous, Marble Palace, department store. The store opened in 1848 and made Stewart the most successful retailer in America. The store was four stories and sold imported women’s clothing.

In 1862, Alexander Turney Stewart built his, Iron Palace, the largest retail store in the world. The store occupied an entire city block on Broadway. It was six stories tall and had nineteen departments. The store sold upholstery, carpet, bedding, silks, toys and dress goods. It was said that you could fit an entire home with only goods from the store, such as the scale of its size and range. Stewart was by now well known for his goods and his wealth. He began operating a mail order business in 1868. This increased his wealth further earning half a million dollars a year from his mail orders. Stewart was offered the position of Secretary of the Treasury by Ulysses Grant. However, he was never confirmed due to his position as an import trader. Stewart started a trend when in 1870 he had a marble mansion or palace built on Fifth Avenue.

In 1871 Alexander Turney Stewart had the Long Island railway connected to his various business interests in the area. By 1876 Stewart had set up his manufacturing plants in New England and began producing his woollen products. He was employing thousands of workers and began constructing a village to provide affordable housing for his employees.

In 1823, Alexander Turney married Cornelia Clinch who was from a wealthy family. Stewart died on 10 April 1876 and was estimated to be worth fifty million dollars. His body was stolen after his burial and held for ransom.

Alexander Turney sent aid to his native Ireland during the famine and organized for families to travel to America fleeing the famine.