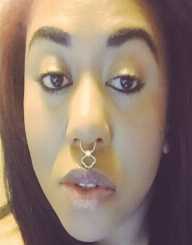 Shataramarie Jackson is an American singer and model who is best known for her single, Cincinnati (Prince’ton Street).

Jackson was born on 9 October 1987 in San Francisco, California. Jackson is the daughter Henry Lee Jackson, better known as Big Bank Hank. Big Bank Hank was a rapper in the American hip-hop group, The Sugar Hill Gang. Big Bank Hank and The Sugar Hill Gang rose to fame off the back of their 1979 hit, Rapper’s Delight. Jackson’s mother was singer Leona Kim from the group, West Coast Family. The family lived in the Fillmore District of San Francisco and her mother performed in the Bay Area. Jackson began her modelling career at the age of two. Jackson was a child model for the baby GAP clothing line. Due to her parent’s fame Jackson was exposed to magazine features and talent shows from an early age. Jackson won her first talent show in 1998 aged eleven years old. Jackson learned guitar as a child and often wrote songs.

When Jackson was sixteen Jackson joined a girl group, Triple SK. Jackson however, soon left the group due to artistic differences over the group’s direction. Instead, she began training as a singer in preparation for a solo career. While still training her voice Jackson worked as a model. Jackson spent five years modeling before finally returned to singing. She signed with XHT Records. In October 2015, Jackson released her debut album; This is Me. Five songs were released as singles, Cincinnati (Prince’ton Street), I Want You to be Mine, Fuck You, I Wanna be a STAR and Touch All Over My Body. The most popular of these was, Cincinnati (Prince’ton Street) which received airplay with some radio stations. The song is actually about Princeton from the group, Mindless Behaviour, and not the street in the city of Cincinnati. Jackson admitted in an interview that she has never even been to the city of Cincinnati and was unaware there even was a Princeton Street.

In December of 2015, Jackson released Christmas Song and the song Under the Mistletoe. Jackson draws her musical influence from acts such as Cher and Prince. Jackson’s music falls into the R&B genre that also has a relaxed jazz feel. Jackson performs under the stage name, Shataramarie. Jackson has a following on social media sites, Facebook, Twitter, and Instagram. At times Jackson has joked that she is addicted to social media. Jackson’s next album, Release Privacy, is slated for release in 2017.

Jackson has three children, Xavier, Hailo, and Trinity. She is currently believed to be single. She enjoys tennis and yoga and has stated that she is a vegan. She now lives in Los Angeles in California. Her father, Big Bank Hank, died of cancer in 2014, the loss came as a major emotional blow to Jackson. She is currently dating AJ Hallenbeck who is a DJ radio host.