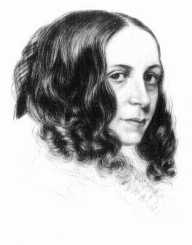 English poet Elizabeth Barrett Browning was born at Coxhoe Hall in Kelloe, Durham, England in 1806. She was the oldest of twelve children and the first of her family born in the country in over two hundred years because the Barrett family had lived in Jamaica for generations where they were sugar plantations owners. Her father was Edward Moulton Barrett, and he decided that he wanted to raise his family in England. Barrett Browning showed an interest in poetry and literature at a young age, reading Shakespeare as a child. She wrote her first poem when she was twelve. As a young girl, Barrett Browning was slightly sickly, suffering from a lung condition that plagued her all her life and she also had chronic back pain throughout much of her life.

Elizabeth Barrett Browning was home educated and was schooled in literature, the classics, and history. She became involved in the Missionary Society at her church and also attended Bible classes.

Barrett Browning published her first collection of poems in 1826.  This publication was entitled An Essay on Mind and Other Poems and was published anonymously. In 1833, she released a translation of Prometheus Bound by Greek dramatist Aeschylus. By the mid-1830s her reputation as a poet was growing. Barrett Browning produced The Seraphim and Other Poems in 1838. After fleeing with Robert Browning to Italy, her first publication was Sonnets from the Portuguese (1850).  She had written the poems before their marriage and dedicated them to her husband. Many believe that this collection was the highlight of her career. Barrett Browning went on to publish Casa Guidi Windows: A Poem (1851), Poems: Third Edition (1853), Two Poems (1854), Aurora Leigh (1857), Napoleon III in Italy and Other Poems (1860) and Poems Before Congress (1860).

Barrett Browning’s mother died in 1828. The family was affected by the abolition of slavery in England because it meant that the plantations in Jamaica were not as lucrative as they had been. The family income was much reduced, and in 1832, her father had to sell his rural estate. The family moved to a seaside town where they rented cottages for three years; then they moved to London. Barrett Browning continued living at home with her father even though relations became strained when he sent her younger siblings back to Jamaica to manage the sugar plantations and estates. Her health was still not right, and she was advised to spent a year near the sea at Torquay. Her brother Edward went with her, and when he was drowned, she was devastated and became reclusive.

After the death of her brother Edward Barrett, Barrett Browning returned to her father’s house in London and lived there for five years, seeing very few people. In 1945, when the poet Robert Browning (1812-1889) an English poet and playwright wrote her a letter, she was intrigued, and a correspondence began. The couple exchanged hundreds of letters. Her father opposed the relationship and forbade them to marry, but the couple eloped and went to live in Florence, Italy. The climate was right for her health, and she gave birth to a child, Robert Wilderman Browning. She continued producing poems but her health was failing and on the 29 June 1861 she died in Florence, Italy.