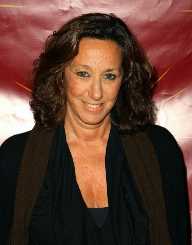 Donna Karan is an American fashion designer. She has earned recognition for her menswear and womenswear DKNY.

Donna Karan was born on October 2, 1948, in New York City, New York. Her name at birth was Donna Ivy Faske. Her father Gabby was a tailor and died when she was three years old. Her mother Helen was a model and worked in a designer showroom. Karan also has an older sister Gail.

Donna Karan attended Hewlett High School. She graduated in 1966. She was accepted in Parsons School of Design in New York.

Donna Karan's first job was with Anne Klein in the 1960s. She moved up to be the head of the design team. She left in 1985 to start her fashion label for modern people. She started with the “Essentials” line before establishing the Donna Karan New York (DKNY) line for younger people. It began as an inexpensive fashion for women, however, in 1992, she debuted her line for men as well.

Though Karan stepped down from the CEO position in 1997, she remained the chairwoman and designer. In 2001, Karan sold her company to LVMH, Moet Hennessy Louis Vuitton. While she stayed with the company as a designer, her contributions were less than previous years.

Karan wrote her autobiography The Journey of a Woman in 2004. In 2007, Karan established a lifestyle brand called Urban Zen.

Donna Karan left her fashion label in 2015 to focus more on her Urban Zen brand.

Donna Karan married her first husband, Mark Karan in 1976. The couple had one child. They divorced in 1978. She then married Stephen Weiss in 1983. They had two children. Weiss died in 2001 after battling cancer.

After the January 2010 earthquake that damaged much of Haiti, Donna Karan promised to assist artists from the country to promote their work, primarily through her company Urban Zen. She established the Urban Zen Foundation with initiatives that support healthcare, education, and preserving culture, particularly in Haiti.

Donna Karan was inducted in the Coty Hall of Fame in 1984. She was named Designer of the Year by the Council of Fashion Designers of America (CFDA) in 1990, 1992, and 1996.  In 2003, Karan was the first American to receive the Superstar Award from Fashion Group International. In 2004, she was bestowed the Lifetime Achievement Award from the CFDA.