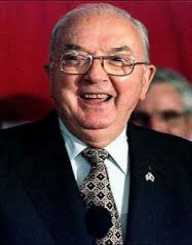 Jesse Helms was an American politician.

Jesse Alexander Helms Jr. was born in the city of Monroe, North Carolina, on October 18, 1921. His father, Jesse, was the chief of the local police station and fire station. His mother’s name was Ethel. He had to start working at a young age because of his family’s struggle during the Great Depression. He studied at Wingate University and Wake Forest College.

After leaving college, Jesse Helms worked as a sportswriter for The News & Observer. Then, he became a sports reporter and an assistant editor for The Raleigh Times. He put his career on hold during World War II, and he served in the U. S. Army. After the war, he became an editor of the city news of The Raleigh Times. He then worked as a sports commentator for the station WRAL-TV.

Jesse Helms first entered politics by working on the Senate campaign of Willis Smith and the presidential campaign of Richard Russell. He served as the chief of the North Carolina Bankers Association from 1953 to 1960. In 1957, he was elected to the Raleigh City Council, as part of the Democratic Party. In 1960, he worked on the campaign of politician Isaac Beverly Lake.

That same year, he became the vice-president and assistant chief executive officer of the Capitol Broadcasting Company. He gave a short political commentary every evening after the news broadcast. He became famous for his conservative views.

Jesse Helms first entered the race for the U. S. Senate in 1972, as a member of the Republican Party. After that, he got re-elected a total of five times. He was one of the most conservative Senators.

He was strictly against abortion, communism, and gay marriage, and he promoted the impact of Christianity. He publicly supported Presidents Richard Nixon and Ronald Reagan, and he was opposed to President Bill Clinton. From 1995 to 1991, he stood at the head of the Senate Foreign Relations Committee. He retired from politics in 2003.

In 1942, Jesse Helms married Dorothy Coble, a magazine editor. They had two daughters, named Nancy and Jane. They also adopted Charles, a boy who had cerebral palsy.

In 2005, Jesse Helms published a memoir, called Here’s Where I Stand. Shortly after that, he was diagnosed with dementia. He passed away on July 4, 2008. He was buried in Raleigh at the Historic Oakwood Cemetery.

In 2005, the Jesse Helms School of Government was opened at Liberty University in Virginia. Helms received honorary degrees from Grove City College, Campbell University, and Bob Jones University. His collection of documents and papers was preserved at Wingate University.