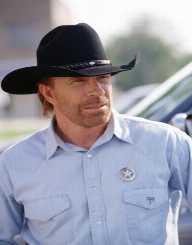 Carlos Rey Norris was born in Ryan, Oklahoma on March 10, 1940. His father was a World War II army soldier, mechanic, bus and truck driver. He has two younger brothers, one of which was killed in Vietnam. As a child, Norris was shy, quiet and nonathletic. His father had a drinking problem, and he went on binges sometimes for months at a time.

When Chuck Norris was 16, his parents divorced, and he moved together with his mother and brothers to Torrance, California. In 1958, Norris joined the army and was sent to Osan Air Base in South Korea. It was there when he started his training in Tang Soo Do. Norris was discharged from the army in 1962.

When Chuck Norris was discharged from the army and returned to the United States, he opened a chain of Karate schools. He was defeated in his first International Karate Championships. By 1967, he had improved his skills and later became a two-time winner of All American Championships. His last loss was in early 1968 when he was defeated by Louis Delgado.

Later that year, he avenged his defeat to Delgado and took the title of Professional Middleweight Karate champion, which he did for the consecutive six years. In 1990, Norris made history when he became the first Westerner to be given the rank of 8th Degree Black Belt Grand Master in Tae Kwon Do.

Chuck Norris made his acting debut in 1969 Dean Martin film The Wrecking Crew. He gained world fame after starring in the 1972 movie The Way of The Dragon as the nemesis of Bruce Lee. Both met at a martial arts demonstration in Long Beach. One of his students, Steve McQueen, was the one who suggested that he try out the acting career.

Chuck Norris also starred in 1977’s film Breaker! Breaker!, Good Guys Wear Black (1978) and other roles, which increased his box office bankability. He became Cannon’s most prominent star at the time and appeared in eight films during four years. Many of the films were produced by his brother Aaron.

In 1993 Norris made a transition to the TV when he began shooting series Walker, Texas Ranger. The show lasted for eight seasons.

Chuck Norris married his first wife Dianne in 1958. The couple had their first child in 1963. In 1964, his daughter Dina was born out of an extramarital affair, but Norris didn’t meet her until she was 26 years old. In 1965 he had a second son with his wife. The couple divorced after 30 years of marriage in 1988. Ten years later Norris remarried to former model Gena O’Kelley. In 2001, the couple had twins. Norris has nine grandchildren.

Chuck Norris is an outspoken Christian. He is the author of several Christian-themed books. He has also made an appearance in several TV commercials promoting Bible study and prayer in public schools. He has also expressed his belief in Biblical creationism and supports the intelligent design movement.

Chuck Norris is known for his contributions towards several organizations, like Funds for Kids, Veteran’s Administration National Salute to Hospitalized Veterans, United Way, and the Make-A-Wish foundation. He has also established the United Fighting Arts Federation and Kickstart Kids. These organizations work to develop self-esteem for kids and keep at-risk kids away from possible negative influences.

In 2005 he founded the World Combat League - a full-contact, team-based martial arts competition. The proceeds of the game are given to Kickstart Kids program. He also supports pediatric HIV/AIDS homes in Delhi, a school for blind children in Karnataka and mission that helps mentally ill patients in Cochin.