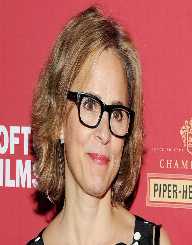 Amy Sedaris was born on March 29, 1961, in Endicott, New York, USA. Her parents are Sharon and Lou Sedaris. Her siblings are David, Gretchen, Lisa, Paul, and Tiffany Sedaris.

Amy Sedaris’s acting career began in 1991 when she appeared in the made-for-television movie, Big Deals. However, after working on this movie, she didn’t appear in another role until 1995. She wrote and acted on the show Exit 57. For one season. This show helped to kick off her career as a comedian. Amy Sedaris then went on to act in the films Commandments and Six Days Seven Nights. She had small roles in both these films. However, in 1999 she started to act in the comedy show Strangers with Candy as the character Jerri Blank. This would late go on to be known as her most famous role.

Amy Sedaris continued to act on Strangers with Candy until the show ended in 2000. After this, she took on various small roles in famous movies like Maid in Manhattan, School of Rock, and Elf. She also appeared in recurring roles in television shows, usually for story arcs lasting a couple of episodes. These shows include Sex and the City, Monk, Ed, and The Closer. It was also in this decade that she began taking on voice acting roles. Some of the animated films and televisions show she has lent her voice to include Chicken Little, Shrek the Third, Space Buddies, and Yo Gabba Gabba!

So far, the 2010’s seem to be Amy Sedaris's most productive decade as an actress yet, or at least, it is one of her busiest decades. For the first couple years of the decade, Sedaris continued to act mostly in small roles in television shows and movies, like Puss in Boots, The Good Wife, 30 Rock, Raising Hope, and Broad City. However, in 2013 she earned a recurring role on the show Alpha House, as the character Louise Laffer.

In the same year, Amy Sedaris also took on a recurring role in the show The Heart, She Holler. She acted on both of these shows until 2014. Later on, in 2014, she took on a voice acting role in the adult animated comedy Bojack Horseman as Princess Carolyn.

She continues to work on this show as of 2018. Some of her other major recurring roles on shows in the 2010’s include Kathy Morgan in Thanksgiving, Mimi Kanasis in Unbreakable: Kimmy Schmidt, Mina Loveberry on Start vs. the Forces of Evil, and Janice in No Activity. Also, as of 2017, Sedaris has written her comedy show, called At Home with Amy Sedaris.

Amy Sedaris owns a business called Dusty Food Cupcakes. She ran this business from her own home.

Wigfield: The Can-Do Town That Just May Not (written with Stephen Colbert)

The Book of Liz - Acting Edition (written with David Sedaris)

Over the course of her career, Amy Sedaris has won the Quill Award for Humor for her book I Like You: Hospitality Under the Influence. However, she has not won any awards for her acting yet. Although, she does have some prestigious acting nominations, which are listed below.