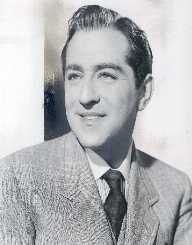 Robert Merrill is an American opera singer and actor who performed with the Metropolitan Opera in New York.

Robert Merrill was born on June 4, 1917, in Brooklyn, New York. At birth, his parents named him Moishe Merrill. He was the son of Abraham and Lillian Miller, Jewish Immigrants from Poland. He got the initial encouragement to sing from his mother. She was herself a former opera singer in Poland before her departure. Merrill dealt with an overweight body, an unhappy childhood and a stutter in speech. He continued with his vocal training until he mastered the stutter when singing.

To counter the weight problem, Merrill played baseball. He used the proceeds of his semiprofessional playtime to pay for his musical training.

In 1941 he auditioned for a spot on the Metropolitan Opera team. Merrill did not make it. At the age of 24, he started singing at various available opportunities. He sang at Jewish children coming of age parties or Bar Mitzvahs. With time, Merrill became a common celebrity singer in parties and weddings within the New York Jewish community. Moe Gale, an agent for opera groups got Merrill a job at the Radio City Music Hall. Merrill continued entertaining the guests at the venue with the Symphony Orchestra.

Three years after failing the first audition, Merrill made it through in the1944 audition in New Jersey. In 1945 he successfully auditioned for the entry at the Metropolitan Opera. He started recording with various artists. Merrill widened his sphere of operations to include bars, nightclubs, and radio and television programs.

In 1946 he became a radio crooner at the RCA Victor Show. He left the Metropolitan team after disagreeing with his bosses over a film acting offers. He featured in his first film Punkin Crick, done in 1952. Merrill returned back to the opera after the film failed to garner any commercial momentum. He returned to the opera in 1952.

Back at the opera, he became a supporting singer. He did several baritone pitches for the group under the lead baritone Leonard Warren. In 1960 Warren suddenly died while on stage. Merrill filled the gap as the group’s co-lead baritone singer. He paired up with Cornell MacNeil in entertaining the revelers at the opera for a while.

Merrill proved to be better after he started working under director Alfredo Antonini. He entertained opera lovers in the open concerts in New York. He also did several open-air concerts at the Lewisohn Stadium in New York. In his twilight years at Metropolitan, Merrill resurrected his old world of radio, night clubs, and television appearances. Merrill stayed at the Metropolitan Opera until he retired in 1976.

Merrill joined the television series Frank Sinatra and Friends for a while. He also went back to his Jewish community. He entertained his community in prayer services and other religious festivals.

He appeared in other sorting games. He sang in the opening sessions of baseball games in New York. Merrill also did the US national anthem for a while. As an ardent fan of the New York Yankees, he often performed donning the Yankees jersey at the Yankee Stadium in New York. He started in the opening season in 1969 and kept singing for years. Eventually, he became a traditional singer at the opening of the baseball seasons.

Merrill sang in over 760 appearances at the Metropolitan Opera. In the studios, he managed to record over 25 songs, solo and duets.

He was nominated in many occasions for musical awards. He was idolized with a star at the Hollywood Walk of Fame.

Merrill married his first wife Roberta Peters on March 30, 1952. In a brief union, the couple divorced on June 26, 1952. Two years later in 1954, Merrill married Marion Mancho. He stayed with her until his death. Merrill had two children in his second marriage.

Apart from baseball, Merrill played golf and authored two books. He did his first book Once More from the Beginning, in 1965. While the second book titled Between Acts was published in 1976.

He was concerned with the welfare of the cerebral palsy sufferers. Merrill worked with organizations in helping the victims of the retarding disease.

Robert Merrill passed on at his New York residence on October 23, 2004. He was buried in the Jewish side of the Kensico Cemetery.

Merrill rose above all his childhood inhabitations to conquer his world of music. He influenced the sporting world and had performances in front of several sitting US presidents.