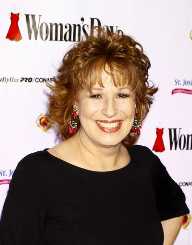 Josephine Victoria "Joy" Behar was born on October 7, 1942, in Brooklyn, New York. Her name at birth was Josephina Victoria Occhiuto. She is the only child of Italian-American parents.

Joy Behar attended Queens College. She earned her Bachelor degree in sociology in 1964. She went on to the State University of New York at Stony Brook. She graduated with a master's degree in English education in 1966.

Behar decided to make a career change in 1979 after she almost died from an ectopic pregnancy. She quit her teaching job and started pursuing a career in comedy. She even worked as a receptionist at Good Morning America during the day so she could be noticed. She earned positive reviews for her stand up comedy in the 1980s.

Eventually, it led to her first TV variety series titled Way Off Broadway that lasted for a season in 1987. Other projects ranged from special comedy appearances, and minor roles in films such as This is My Life (1992) and Manhattan Murder Mystery (1993). She was even the host of a call-in radio show on WABC in New York.

Joy Behar became more of a household name when she became one of the original panel members of the ABC daytime talk show The View in 1997. While she first sat in on the days when the co-creator Barbara Walters was away, she became a regular host. She and the cast of female co-hosts earned their first Daytime Emmy Award for Outstanding Talk Show host in 2009.

While she was still working at The View, she was also a guest host for Larry King Live before getting her own news/talk program on Headline News TV network in 2009. The Joy Behar Show aired between 2009 and 2011. She took her talk show personality to Joy Behar: Say Anything! on the Current TV network in 2012. It was canceled a year later when Current was purchased by Al Jazeera.

Joy Behar has taken the time to write books. Most reflect her comedic personality such as Joy Shtick (Or What is the Existential Vacuum and Does it Come with Attachments) in 1999 and The Great Gasbag: An A-to-Z Study Guide to Surviving Trump World which was published in 2017. She also wrote two children's books about a dog titled SheetzuCacaPoopoo.

Joy Behar returned to The View in 2015. She also had a weekly late-night talk show on TLC titled Late Night Joy. Behar also lends her voice in animated films such as Ice Age: Continental Drift or appears as herself on various TV shows and movies.

Among Behar's charitable works, she played celebrity poker to raise money for the U.S. Fund for UNICEF.

Joy Behar has multiple nominations for her role as co-host on The View. She along with her fellow co-hosts have won an Emmy one time.

Joy Behar has had to apologize for some of the things that she has said in public, particularly on her TV shows. She has disputed with co-host Star Jones but has also criticized others including Bill Clinton's sexual assault accusers and Vice President Mike Pence.

Joy Shtick (Or What is the Existential Vacuum and Does it Come with Attachments) (1999), SheetzuCacaPoopoo (2006), The Great Gasbag: An A-to-Z Study Guide to Surviving Trump World (2017)