Furthermore, the Pig man and Monkey woman have the chance to check on something important and successful. Also, the Pig woman and Monkey man will lead a good life though they have to be cautious about handling one another. The male Pig and female Monkey will be checking on few areas that might affect how they thrive in life. Besides, female Pig and male Monkey intend to form a great partnership that will boost friendships. All these factors are contributing positively towards a common end. Everything is possible as the passion in a Monkey is making everything clear.

Year Of The Monkey Compatibility

The Pig Monkey compatibility can be extremely good or bad. Both of them are opposites and can find it tough to adjust to each other.

The Chinese astrology sign Pig is a loyal, honorable, and passionate person who delights in all things pleasurable and comfortable. They are never happier than when following their interests and making others around them happy. They are generally fairly laid back and willing to let others live in any manner they wish, but if crossed, they can show a deeply malevolent side.

The Chinese animal sign Monkey is a social butterfly and party animal. Their high energy level and curiosity keep them moving from one group of friends to another and from any given interest to another. The Monkey never rests more than lightly on a given cause or individual. 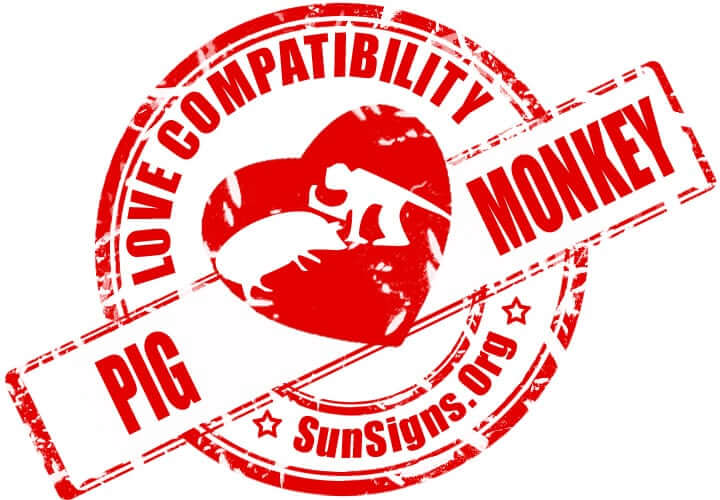 Any Pig and Monkey relationship must be based on mutual tolerance and understanding. Shared passion will not make a solid base because the Monkey lacks the attention span to spend a significant amount of time and effort on a single pursuit.

As soulmates, the Monkey and Pig might find it difficult to bond initially, even if their love compatibility is good. Even while they are dating, it will be more of a fling than a serious relationship, which predicts the Chinese horoscope compatibility.

The Monkey man or woman will either become bored with the monotony or will, quite simply, become distracted by the first another thing to pique their curiosity. This contrasts sharply with the sedentary nature of the Pig.

The Chinese Pig man or woman is generally more apt to enjoy time at home with a close circle of loyal and trustworthy friends. This is not to say that the Monkey is untrustworthy; it must be clear that they, like a butterfly, rarely rest lightly and never for long.

Monkey Compatibility With Other Animals

In the Pig Monkey compatibility, a sexual relationship between these two is possible but will likely be brief and is generally bad news. The Monkey will have difficulty remaining with a single partner. They are not well known for being ready, willing, or able to make long-term, dedicated commitments, thus leading to a breakup of this marriage.

As far as sex goes, the Boar and Monkey in bed will bond very well sexually. This isn’t necessarily a bad thing. However, it must be kept in mind that this will not last long and is more than likely to end with the Pig feeling insulted, abandoned, slighted, hurt, and is liable to lash out with vehement maliciousness.

That being said, a short-term, casual encounter with ground rules stated clearly in advance will be great! The curiosity and energy of the Monkey combined with the sensuality of the Pig could very well lead to refreshingly fulfilling encounters and expanded horizons. This is also how a long-term romance between Pig and Monkey in love might build up. As long as enough exploration is done to continue to satisfy the curiosity of the Monkey, there should be no reason for straying. 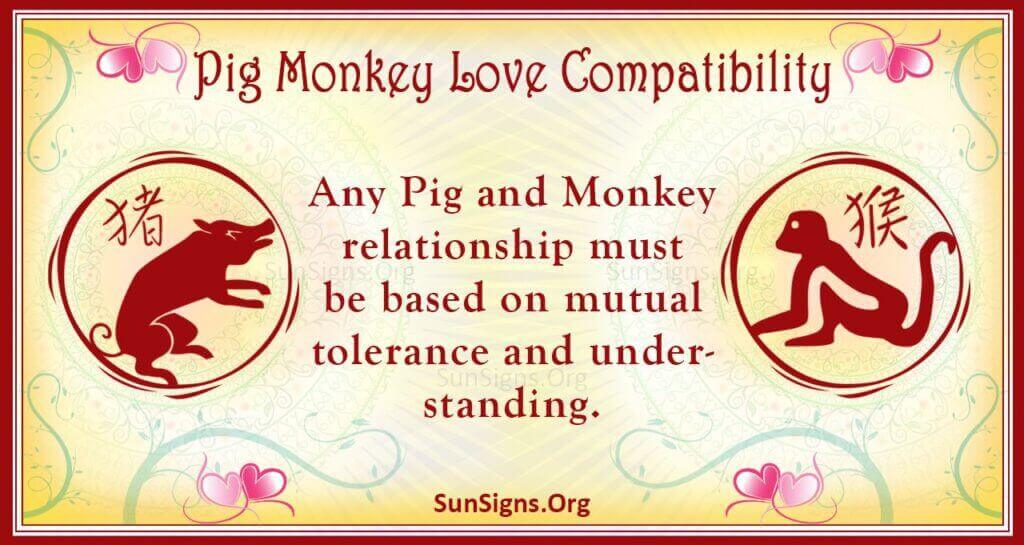 Which Is A Lucky Year For Pigs?

The curiosity and carefree attitude of the Chinese zodiac sign Monkey can readily take unwise or unnecessary risks. The Monkey male or female is bold and will try to take the lead in any partnership. This can lead to them, unintentionally, taking advantage of the male or female Pig.

The Monkey, generally, will not consciously take advantage of others for personal gain. But their generally self-centered nature can and does create such situations. The Pig should be willing to provide the bulk of the grunt work. And, from time to time, leash the Monkey onto a realistically productive track. Only then, the partnership can work quite well.

The Monkey can provide invaluable, out-of-the-box thinking and creative workarounds for any problem that arises. If the Pig Monkey friendship holds together, it can be quite profitable and fulfilling for both parties.