Additionally, the Pig man and Rabbit woman are working together to seal on something that will bring success in their relationship. Importantly, the Pig woman and Rabbit man might have some indifference but they w wok on the best way forward. It applies to a male Pig and female Rabbit who might be bringing solutions to some areas of life. But the female Pig and male Rabbit are working in a condition that can brighten the future. However, optimism is what is keeping them more strong. They believe that they hold core values in life and can apply the same thing to reach an epic of prosperity.

Year Of The Rabbit Compatibility

But are the Pig and Rabbit compatible? All of them are working on an area that will have real success. So, Pig in the year of Rabbit is a good sign of finding what helps in marriage. At the same time, the Rabbit in the year of Pig suggests many things that will help in life.

The Pig and Rabbit compatibility is very well matched for a wide variety of relationships.

The Pig is industrious and honorable, fiercely protective of the people and ideas that it cares about. They are willing to give one hundred percent to any endeavor they believe in. They are fully capable of spending just as much time lounging as straining under the whip. All Pigs share a passion for the visceral things in life, reveling in every luxurious experience.

Rabbits are more nervous and skittish Chinese animal sign, perhaps more in line with their namesake than others. Rabbits, as a rule, shy away from any form of confrontation.

They are most comfortable when surrounded by a solid base of friends, family, and routine. The timid and emotionally volatile surface layer of the Rabbit zodiac sign hides a deeply passionate core and willingness to devote all of their energies to defending those they care about. 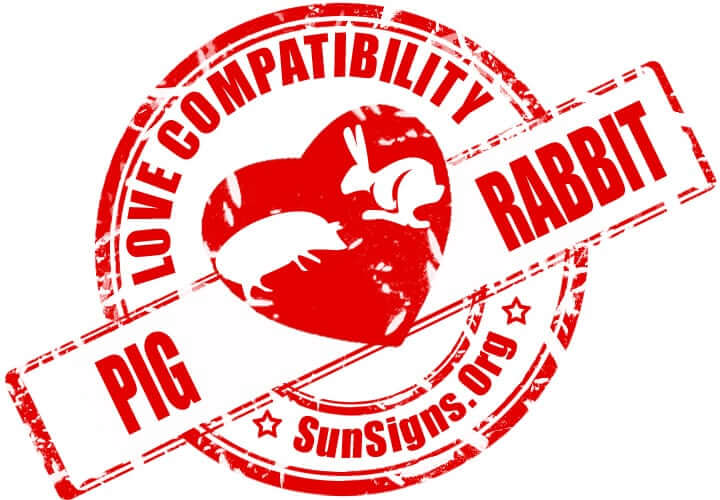 The Pig and Rabbit love compatibility is very well matched for a wide variety of relationships. Should they be family members, the Pig will provide a loving and supportive launch pad from which the Rabbit can retreat for shelter and recover for another foray into the world.

The Chinese horoscope compatibility suggests that the Pig and Rabbit soulmates complement each other quite well. The Pigman can allow the non-confrontational Rabbit woman to be comfortable enough to express herself without fear of being crushed when the female pig starts dating a male rabbit. But, this will lead to a happy marriage. They will be in love with each other for a long time to come.

The Rabbit man is also likely to find quiet comfort in the presence of the Pig woman, who shares the ability to find great pleasure in the simplest of things. These two zodiac signs will also be fiercely devoted to. Additionally, protective of one another in any relationship. Besides, ready to leap to the defense of the other perhaps a bit too quickly at times.

Which Is A Good Year For Rabbits?

The female Rabbit would do well to learn some assertiveness. The male Pig should be of immense help, here, allowing his lover to get comfortable expressing herself in a form that lacks judgment or challenge. Self-respect will serve the Rabbit well in life.

There is very little to be found between these two that could break up a Pig Rabbit relationship. Once the Rabbit becomes comfortable enough in shared presence with the Pig, things can lead rapidly to a level of shared adventurousness rarely seen in other pairings.

Luxuriating for hours in the company of one another in various states of undress. Also, chatting idly while staring at the ceiling and other things are normal in these circumstances. To Pig and Rabbit in bed, sexual intercourse is only one small part of the greater sensual experience. 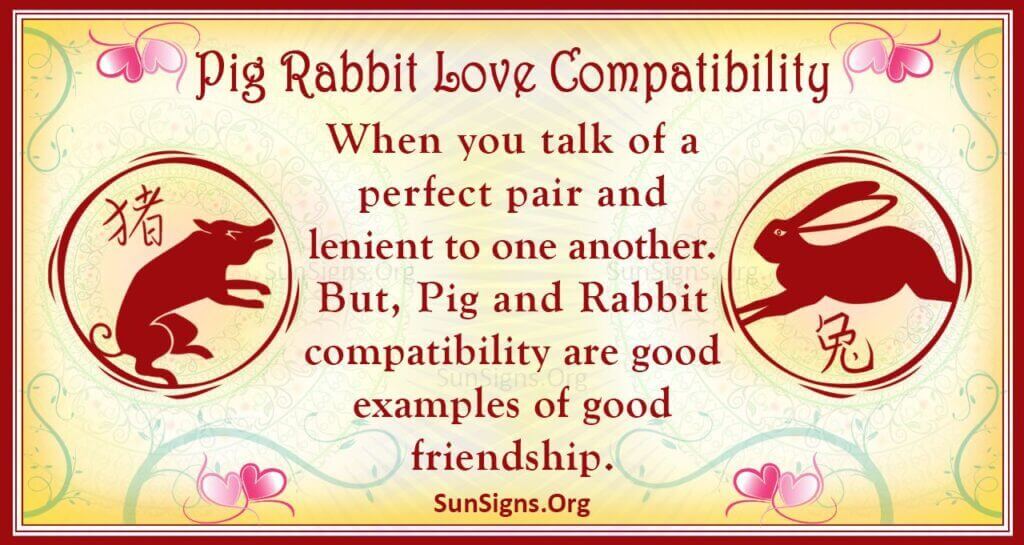 In a financial partnership, the Pig will tend to reverse its’ normal supporting role and take the fore when dealing with others. So, It will, however, be more of a partnership than appears on the surface. Others may largely deal with the Pig and not recognize the Rabbit’s hand in any given decision.

The Pig would be loath to make any major decision without consulting the Rabbit in a somewhat democratic process. There is no real hierarchy between these two. The opinion of each is respected and taken into account in all things.

The differing approaches that each Chinese astrology sign applies and the comfort level they share lead to the ability to speak freely about what is thought or felt. A willingness to accommodate the other can lead to constant and effective compromise in a Pig and Rabbit friendship.

When you talk of a perfect pair and lenient to one another. But, Pig and Rabbit compatibility are good examples of good friendship. Looking at virtues that they share is what keeps them more affectionate to one another.