How good or bad is the love compatibility between a Scorpio and Leo emotionally, mentally and sexually? Read on…

The Scorpio and Leo compatibility in a romantic relationship will be exciting and passionate together. They will both understand what each other needs. Scorpio will demand to be respected and wanted. Leo requires constant adoration and flattery. They will be very devoted and possessive of each other. They will both be able to give each other what they need and will enjoy each other’s strengths.

The planets Mars and Pluto rule over Scorpio. The sun will rule over Leo. Mars is concerned with war, boldness, and battle. Pluto will influence Scorpio’s thoughts. The House of Sex rules over Pluto. Pluto has ideas of regeneration and rebirth that are a constant theme in the Scorpion’s life. The sun is concerned with ego and self. The sun gives off warmth and light.

The Leo star sign will definitely give off this kind of zeal and excitement. The Scorpio and Leo couple have an excess of male energy. Because of this, the scorpion and the lion will lighten their fights and be able to help each other out. The planets Mars and Pluto symbolize motivation and the unconscious. At the same time, the sun symbolizes life. They will both need to take time to understand each other on a deeper level. The Scorpio Leo love compatibility will have a romance that is optimistic and will have high expectations.

Scorpio is a Water sign. They will have a changing personality. Leo is a Fire sign. They will demand the independence to be social. They will both want to be in control, but in different ways. This might cause them to have arguments when they otherwise might not. Like their elemental influences, they could end up negating each other’s traits. Scorpio and Leo in love might not be in balance.

However, they will both recognize that petty arguments will just be a distraction. The scorpion and the lion will both need to keep their egotistical natures in check and make the Scorpio Leo relationship compatibility the most important thing. Then they will be able to resolve their disagreements. Read more about Scorpio compatibility. 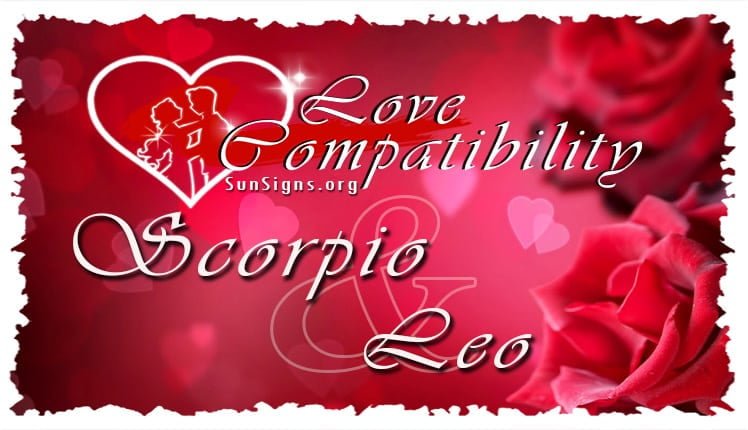 The best thing about the Scorpio and Leo compatibility in a romantic relationship is that they are both dedicated to each other and the projects they work on. They are both very powerful and have different zodiac personalities. They will both have different methods of strategizing. They will be seen as a strong couple by other people. They will both be devoted to accomplishing their goals. Because of this, the Scorpio Leo marriage will have a strong relationship.

The lion will revel in comfort and luxury. They will usually do things on a large scale. Leo sun sign tends to be extravagant. Scorpio zodiac sign will admire that and will be more than happy to be the audience the lion needs. However, there has to be an equilibrium in this Scorpio Leo love compatibility.

The Leo personality will shine brighter and more persistently. They will be the living, breathing example of magnificence and luxury. Scorpio personality will not enjoy being the center of attention. At the same time, they will like to control things behind the scenes. The scorpion and the lion will be motivated. They both need to respect and accept each other.

A Scorpio dating a Leo both have very powerful personalities. They have a very obvious physical chemistry. They will have a passionate emotional bond that will pull them together despite their different personalities. They will have a relationship that is intense, very devoted, and fast paced at its best. Scorpio and Leo’s sexual compatibility in bed will be based on a karmic link that neither will be able to break easily.


Scorpio and Leo soul mates will both have to understand how to navigate their relationship. If they can do this, they can have a relationship that is somewhat stable. The scorpion values emotional security. The lion will be most compatible in a relationship with a stable base. Leo will find Scorpio mysterious and enigmatic. Because of this, the lion will be very attracted to the sorcerer and vice versa.

If they are able to do this they will have a relationship that will be completely devoted and loyal. The Scorpio Leo compatibility will still be marked by intense arguments. The chemistry that attracted them to each other initially might be enough to keep them together. They will both need to learn how to forgive each other.

The Scorpio Leo love compatibility will be marked by a lot of drama, intense disagreements, and vengeful feelings that can scare other people. They will have fights that are legendary. Scorpio will be likely to hold a grudge for a long time.

Scorpio and Leo are both Fixed signs. They will both be stubborn, have strong opinions, and will not want to change. The scorpion and the lion will both be very determined when they are working towards their goals. When they make a plan, they will stick to that plan until they get what they want.

Neither the Scorpio nor Leo zodiac signs will want to change. They will both want to stick to something that is stable and steady. If they do not have ideas that agree then they might have constant arguments. The scorpion will not be likely to give in. They see that as a sign of weakness. Leo might think Scorpio is being too complacent. They will both need to understand they are in the same side in the big picture. They will be likely to be more productive.

In this Scorpio and Leo compatibility, both will both want control, but in different ways. Because of this, they will be more likely to fight over this. Leo is the royal of the zodiac. They are very strong willed and will find a good love match in the scorpion. Scorpio is the sorcerer of the zodiac. The lion will take things just by the will of their personality.

At the same time, Scorpio men or Scorpio women will use manipulation or more devious methods to take what they want. The scorpion and the lion are both fixed signs. They are not likely to compromise. They can both be very envious. Eventually, the Scorpio and Leo compatibility seems to become all or nothing. They might not think it is easy to live together. At the same time, they might not think it is easy to not be together. Because of this, the Scorpio Leo breakup might seem fateful.

The scorpion and the lion can understand their love compatibility better if they look at the planets and elements that rule over them. Scorpio is a water sign. Water will usually put out fire. However, Scorpio is a special situation.

Leo is a fire sign, but Scorpio might not put out that fire easily. The scorpion is ruled by both Mars and Pluto. Mars will give Scorpio fire traits. Because of this, Scorpio and Leo in love might be seen as a relationship of two fire signs.

The scorpion and the lion will definitely have comparable energy levels. Pluto is the planet concerned with regeneration, destruction, and rebirth. Pluto is powerful and will be more than capable of being a zodiac match for the sun.

Scorpio and Leo will have a compatibility that is raw, but hard to resist for both of them.