Raven totem is symbolic in many shamanistic traditions. Also, they are deeply relevant in many faiths throughout the world. There were many places in the Americas that Raven was a totem animal. Moreover, they focus heavily on the abilities of shape-shifting.

From an animal totem standpoint, shape-shifting involves taking on different forms for travel. This is especially in the spirit realm. Therefore, embodying the elements of that form. Raven, in particular, has an association with this due to his trickster aspects. Moreover, some lessons come through guile.

Renewal through destruction, spiritual mysteries, exploration of the unknown, contemplation of the inner self, shape-shifting, occult wisdom

Raven in the Pacific Northwest is a symbolism of being responsible for the land. He brought a stone from the land of the spirits. Thereby, dropping it into the ocean and forming this first landmass. In other areas, he brings the stars, moon, water, and fire to the earth. Therefore, his encounter with fire. He stole it from the sun, resulting in his black feathers. The raven feathers were originally white.

What is the Meaning of the Raven Symbolism in Various Cultures?

“Hunin and Munin fly each day
over the spacious earth.
I fear for Hunin, that he come not back,
yet more anxious am I for Munin.”

In Norse Mythology, Odin had two Ravens that travels with him. They are both Hugin and Munin. Their names mean thought and memory. Also, they are relevant to revelations of experience and the mind of the wisdom of our ancestors. They can fly anywhere in the world. Moreover, they can bring information and inspiration to those they touch. 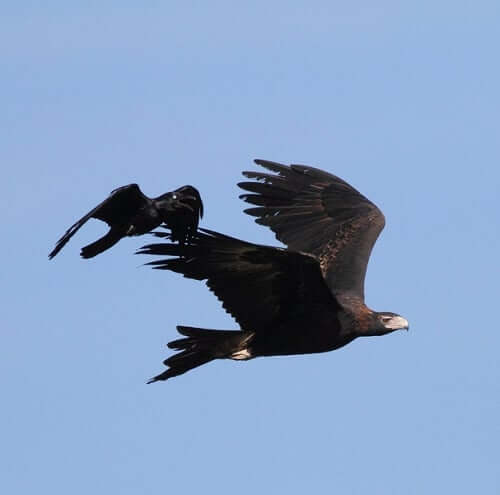 The poem above references that while a thought may be gone, it is far much worse to lose our memory. For our memory tells us who we were, and by that, who we are. It is obvious that Hugin and Munin represent Odin’s ability to send his thought and memory. This can be into a shamanic trance state, and thereby traverse the world.

In Celtic Animal Mythology, Ravens are known to serve the Morrigan. Therefore, they are carrion birds that appear before and above the fields of great battles.

They arrive as messengers, carrying important messages to those at war. Also, some believe that they are heralds of death for those doomed to die in battle.

They are also responsible for carrying the spirits of the dead away from the place they’d fallen to their enemies.

As spirits, Ravens bear the honor conventionally as well. Some say that the ravens of the Tower of London should never leave. This is because the Kingdom of England will fall as a result. This belief is pervasive enough that King Charles did not remove them.

The Raven totem will guide you through the spirit world. Also, it will guide you in understanding yourself and the mysteries of the world. Be wary, for he often teaches through guile and deception. Therefore, you may as often find yourself feeling a little foolish in your teaching.