According to Chinese astrology compatibility, in the Pig and Rat relationship, both the partners share excellent love compatibility with each other. Be it love or business, this partnership is one that will last long.


The Pig is an industrious and honorable sign, driven by a passionate nature to make every effort toward their hearts’ desire. They are often mistaken as being lazy. This is because any moment not devoted to toil and labor is instead directed toward experiencing and luxuriating in pleasures of all sorts.

The Rat is an intelligent and resourceful Chinese astrology sign that is predisposed to cleverness and wit. There is no situation from which they cannot find something good, whether it be material or spiritual, to take with them. 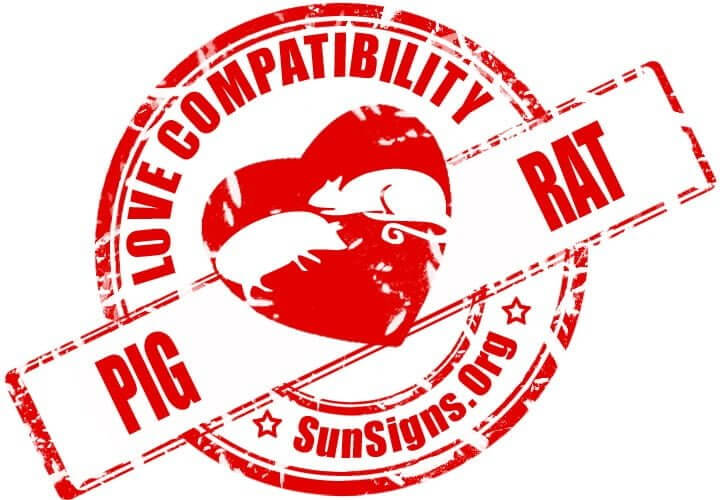 The Rat and Pig in love can get along quite famously. The Pig is certain to appreciate the quick wit and cleverness of the Rat, whom it will find quite charming. They will also feel quite spoiled by the trinkets, knick knacks, and ideas that their lover scrounges up and delivers like tiny treasures.


When the rat and pig start dating each other, they enjoy the attention that they receive from their partner. It won’t be long before they are thinking of commitment and marriage.

The Rat woman is sure to feel well protected and appreciative of the loyalty of the pig man, not to mention the stability they provide. These two zodiac signs can and do work very well together in most circumstances.

In a rat man and pig woman compatibility, both are often willing to overlook the less desirable qualities in each other for the benefits each brings to the partnership.

In a Pig and Rat marriage, they are happiest when able to construct a stable home life. They like being surrounded by close friends and family, expending every effort toward the happiness of these individuals.

The male rat and female pig in bed is truly a hit or miss affair. It is entirely possible that the Rat’s taste for finery will be satiated by the Pig’s sensuous nature. It is also a point of contention. The relative energy levels of these signs is vastly different outside of a work environment.

The Pig likes to slow things down and enjoy every sensation for as long as possible, while the Rat is constantly scuttling and shifting from experience to experience. If these annoyances can be overcome, there’s no reason the rat and pig cannot sexually satisfy each other.


It is also entirely possible that though both will be drawn in, the female Rat might become bored with the male Pig, who will then feel betrayed. This is good for no one – least of all the betrayer and then a breakup of the pig-rat soulmates becomes inevitable.


Rats are canny, savvy, quick on their feet, and able to make the absolute best of even the most disastrous of situations. This often translates into a seemingly supernatural luck with money.

The self-centered nature of this Chinese sign can lead this to rather rapidly turning into outright greed. But this is usually tempered equally by a willingness to generously reward those whose loyalty and support helped them along the way.

The rat is not necessarily a kleptomaniac, but they are most assuredly motivated by self interest. They have to understand that loyal friends are hard to come by and keeping them happy and well rewarded is the best way to keep their loyalty.

The Pig is a hard and industrious worker, driven by passion, who can readily take direction and willingly accept heavy loads for the good of others. Here, the Rat is likely to see the Pig as a resource to be used.

This is not necessarily a bad thing, as it can very well make the Rat and Pig friendship stronger to in order to make the most of their partnership. The Pig is more than likely to appreciate the seemingly magical ability of their partner to stay on top of things and keep the pair in the black.