Furthermore, Pig man and Dragon woman have the opportunity of sorting out anything that is hindering their success. But the Pig woman and Dragon man have the chance to enlarge a great level of achieving success in life. To thrive well, the male Pig and female Dragon will develop a framework for achieving small steps. Besides, the female Pig and male Dragon will reflect on good actions that will be facilitating progress in the right way. But the Pig and Dragon marriage compatibility leads to a strong love between the pair. Hence, they will not run short of anything. But focusing on development and expansions.

Year Of The Dragon Compatibility

Besides, the Pig and Dragon friendship lay a background for anything looming in the future. So, the Pig in the year of Dragon is a long way to deter its success. Thus, the Dragon in the year of Pig suggests many things that will help tame anything negative in the love affairs. Moreover, the Pig and Dragon married couple enjoy life from better hustle and business compatibility.

The Pig and Dragon compatibility can be excellent, provided each one learns how to handle the other.

The Pig is a noble and honorable sign that contrasts hard work with passion. They are equally at home away at productive tasks as also lounging on a sofa. This Chinese astrology sign may not tend to be the greatest of leaders. But they are more than capable when it comes to taking directions and getting things done.

The Dragon is a powerful, keen, motivated Chinese animal sign that gravitates toward any position of power and authority. It is only natural – in their mind, no one less will do. Destined to be the center of attention, the Dragon will bring to bear a great of charms, wit, and charisma to collect a coterie of disparate followers. They must remember not to become reckless. They take losing, even the perception of losing, very poorly. 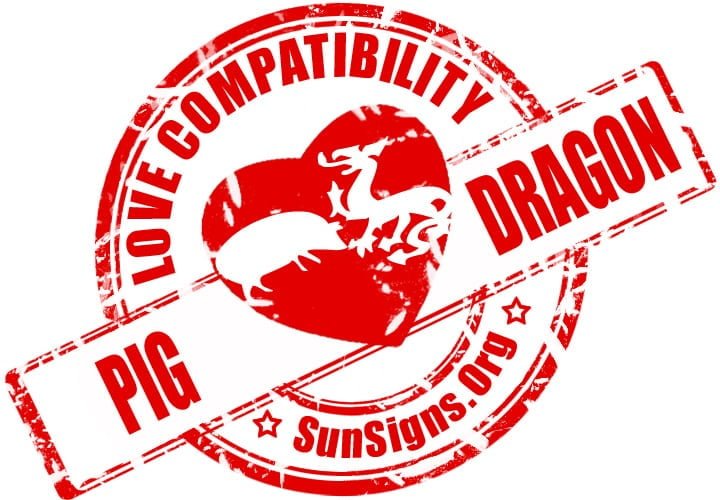 The energy of the Dragon can be refreshing to the normally sedentary Pig. But it can also grate with such intensity that the normally laid-back Pig can grind their teeth. The Pig man or woman may be more than willing to provide attention to the Dragon man or woman.

But danger lies in the Chinese Dragon’s ego. Their temper can be quite difficult to follow. But let alone predict, because of how strongly they feel the joy of victory and the agony of defeat. The Dragon, quite simply, lives a life of epic drama that can be quite unbalancing. Also, uncomfortable to any self-respecting Pig.

The Pig and Dragon in love very closely share an affinity for passionate closeness. Also, the Dragon is not so willing to bask in the afterglow or luxuriate in bed all day. There is always something that requires their attention and someone who needs to be reminded of the Dragon’s presence and superiority.

Who Should a Dragon Marry?

The Pig Dragon in bed will sexually be compatible. But expect it to be a series of short but encounters of high intensity throughout the schedule of the Dragon. Problems may arise in this marriage from the Dragon viewing the relaxed and comfortable Pig as lazy and lose interest rapidly. This will, unfortunately, lead to a breakup of the Pig and Dragon relationship.

Due to their passionate nature, a Pig male or female will never be pleased unless working toward something that they deeply believe in. Their nature leads to a passion for love and sex. They revel in all five senses and find great ability in both being stable and making others happy.

Here we come to a place where a working Pig Dragon friendship can be quite profitable. Dragons tend to be natural managers, easily keeping track of dozens of people and developing situations. Therefore, direct every person to where their efforts will produce the greatest return on investment. 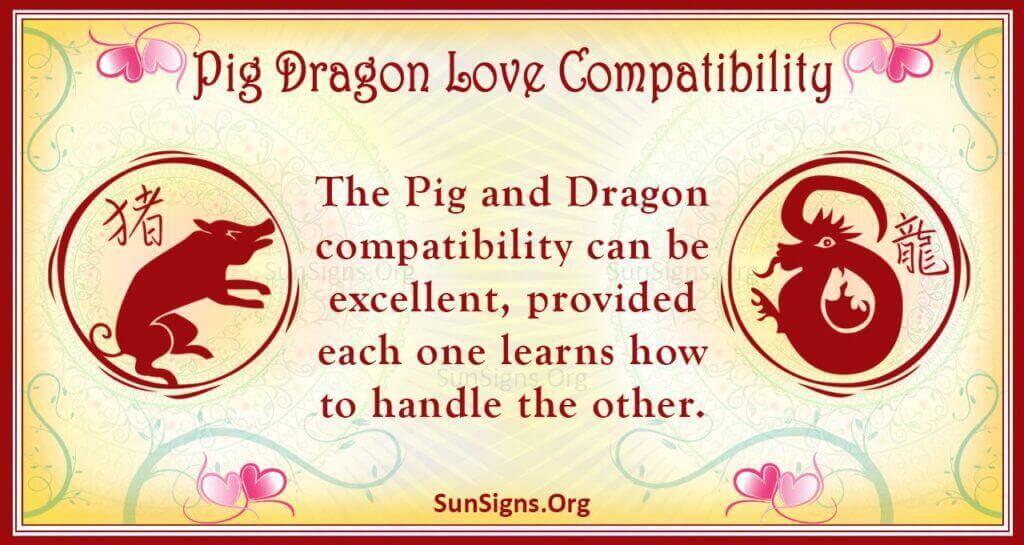 Which Is A Good Year For Dragon Love?

They can also do all of this with a smile and a nod. But keeping everyone motivated through sheer charisma. Hence, they do nothing by half measures. They are bigger, louder, stronger, and faster than everyone. A strong foe or wily opponent will generate either an emotional crash or drive the Dragon to better the challenge.

Because of this, the Chinese zodiac sign Dragon throws every effort into whatever task may be at hand. But can be quite alluring to the Pig’s affinity for passion. Should the Pig and Dragon soulmates ever disagree, it will be quite some time before either can come to an accord with the other.

Pig and Dragon compatibility consist of virtues of love and belief in one another. But understanding attitudes is one that is keeping them together. So, the Pig and Dragon will do anything to remain relevant to the relationship.