Monkey and Pig compatibility illustrates a relationship where both are self-driven and focused on their career and lifetime goals. In other words, it is an added advantage to meet someone who will lead you to the position you want to be in life. Sometimes your partner will become your motivator to do great things in life. Specifically, when you have a caring partner, your life will become successful because you will see goodness in everything. Equally, as a go partner, you must maintain good qualities that make your soulmate feel appreciated.

Are Monkey and Pig compatible? Ultimately, every relationship can be complicated for someone to decide. Generally, a relationship is not just something to joke around with; you have to be wise enough to make the right decisions. On the other hand, the decisions you make concerning your relationship should not be material-based but your intuition. Your intuition will guide you to the right place where you can meet your rightful partner. Notably, you can never force anyone to love you, but it is a spiritual connection.

The Monkey and Pig in love can have an enjoyable time together. Will the entertainment last? Will their differences get in the way of them having a long-lasting relationship? Do their similarities bring them together or force them apart? What does the Monkey-Pig compatibility need to be successful in love?

Pigs are very loyal to the ones they are closest to. The loyalty is so great, and it might be their fault since it leaves them open to being taken advantage of. This is exactly what the Monkey might do if the Monkey Pig’s love compatibility isn’t up to the highest level. 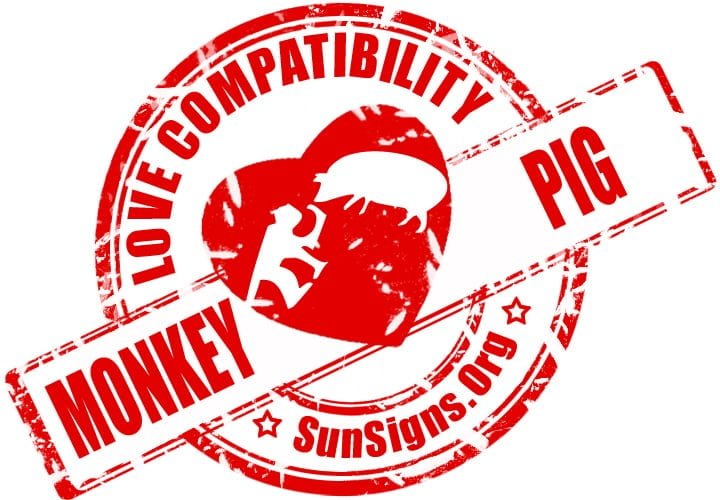 Both the Monkey and Pig Chinese zodiac signs are usually known as being upbeat, optimistic, and sensual. They seek out things that make them happy together. Overall, the Monkey Pig relationship can be pretty happy. The best thing these two can do is focus on each other’s positive qualities. Probably, when you focus on the positive side, then everything positive will attract your life. On the other hand, you have to avoid something negative because it will bring negative stuff to your life.

The Monkey does tend to be more decadent and sensual than the Pig. This comes not from their love of domestic pleasures but rather those that have to do with parties and large groups of people. They are more concerned with finding their treats. They are not the kinds to back down on something they want to do or something that makes them happy.

The Pig adores the finer things in life, including luxurious foods, plush decorations, and lots of days just napping or taking a long bubble bath. They are more concerned with family and friends. Besides, they need to be able to show some give and take. They tend to be very giving when they are in love. Also, they will not mind giving in to something to make their partner happy. Their calm nature could be the reason their partner bosses over them in business.

In a Monkey man and Pig woman compatibility, the male Monkey might push the female Pig to get out of the house instead of staying in. They are not going to want to keep doing it repeatedly. Eventually, they will give up and decide to get out of the house on their own. They might not be aware of their bossy nature as they would not ever want to mistreat their lover on purpose.

The Monkey is intimate, but that does not mean they want to spend a lot of time in the bedroom. Sexually the Monkey woman and Pig man in bed make good partners. But each will expect the other to give them what they want.

The male Pig will jump into going after their goals. They can profit from the female Monkey’s money smarts. The Monkey is not too keen on their partner being so giving because they often feel they might be doing it at their’s expense. The Pig often shows kindness to others, making the Monkey unhappy.

Chinese astrology compatibility predicts that they want their loving gestures to be appreciated when the Pig is dating the Monkey. If this is not done, the Monkey Pig, who could go on to be soulmates, might break up. Besides, it is hard for soulmates to break up because they belong to each other. If they broke up, they would keep connecting until they reconciled.

These two Chinese zodiac signs must try harder to ensure their efforts match each other. The Pig is not very good at understanding the Monkey’s nature. The Monkey seems to think the Pig is a little boring because of their honesty. 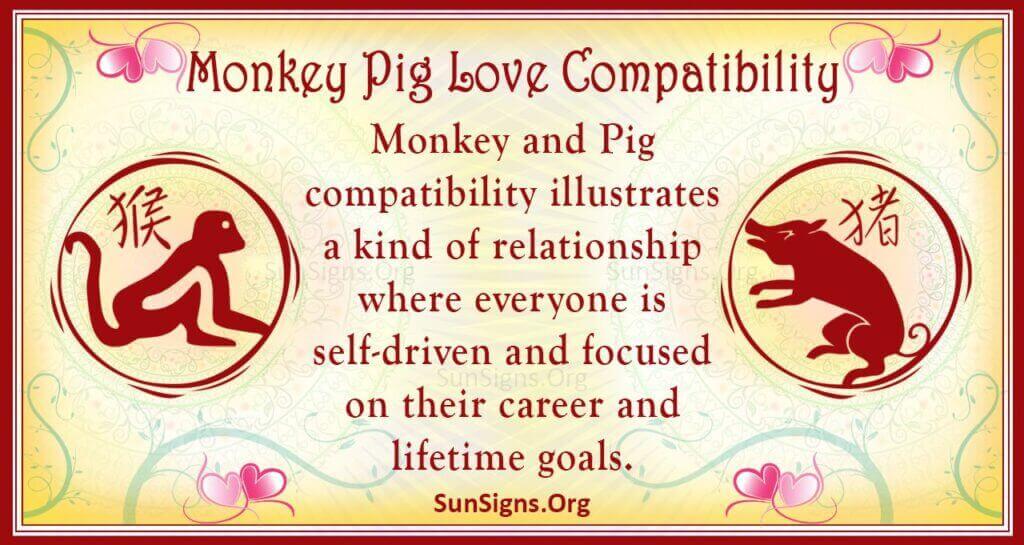 The Monkey has quite a charisma that other people will usually attract. The Pig is simple and finds the Monkey too complex and snobby. These two will see that arguments repeatedly happen in a Monkey Pig marriage. But because of their excellent understanding and friendship, everything will be resolved.

Monkey and Pig compatibility describes a relationship where both partners liked one another when they were kids. This happens after meeting for several years, and they still have the same feelings for each other. Those are the perfect soulmates because they met when they were single and were ready to mingle. Equally, they are happy because they finally found each other at the right age for marriage.