Pig and Snake compatibility proves to be futile unless they work on the personality traits. Hence, Pig and Snake have parallel objectives in life, developing a certain attitude in a relationship. So, Pig Snake Chinese compatibility shows the least chances of having a reliable time together. But Chinese zodiac compatibility shows the differences between the two can come to an end through building trust. That is the only method that can prove to help them stay together. However, the Pig and Snake friendship is a pure indication of settling on a strong point.

Moreover, the Boar and Snake marriage compatibility seems not to happen, and will note different things that might lame the pair. So, the Pig man and Snake woman must accept the challenge they face to develop a long-term relationship. Of course, the Pig woman and man Snake will have to form a pair that will help them join a strong family. The male Pigs and female Snakes are looking into cutting off the indifference to have a future together. On the other side, the female Pig and male Snake will be working on a parallel scheme to achieve a common objective.

Pig In The Year Of Snake

Pig and Snake’s relationship can help in knowing the differences between the two horoscopes’ signs. But are Pig and Snake compatible? The chances are minimal and can be limiting t have them together. Snake in the year of the Pig shows the message of unity though they are not compatible. The Pig and Snake married couple will have a rough time together since they serve different purposes in life.

The Pig and Snake compatibility is very poor when it comes to love, friendship, or business.

The Chinese astrology Pig sign is intensely passionate and easily distracted by finery and the quest to bring happiness to everyone. While equally able to appreciate the decadent things in life, the Snake is much more likely to use sensuality for seduction.

It isn’t that the Snake is looking for a lover or sexual partner in everyone they meet. Rather, the Chinese zodiac sign Snake suffers from inner insecurity that leads them to validate themselves through the adoration of others. 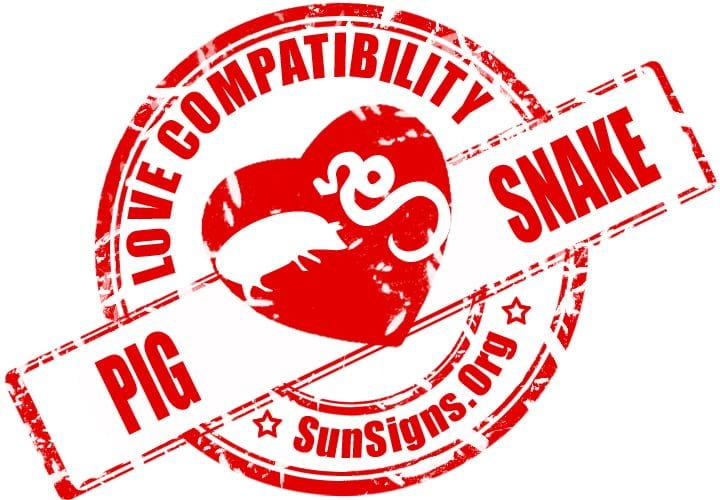 A Boar and Snake friendship is perhaps more exciting and more dangerous than even a Pig-Pig match. The loyalty of Pig is unquestionable, but they are also mysterious by nature.

When the Pig is dating a Snake, their love compatibility might be bad, thus leading to a breakup.

The Snake sign tends to be insecure, and this mystery can and will cause jealousy. A casual relationship may not be possible between these two Chinese horoscope signs, as it is entirely possible for the two to fall into an inward spiral of ideas and facts that excludes the outside world entirely.

This mutual orbit is inherently unstable, however, as the Pig and Snake soulmates operate quite differently. With hard work and effort, a relationship can be made viable. Do not ever fail to underestimate the amount of work that will be mandatory. Despite liking many of the same things and sharing many of the same interests, the Pig tends to operate logically and intellectually. In contrast, the Snake tends to operate almost purely on intuition.

Compatibility Of Snake With Other Animals

Misunderstandings will be frequent and must be recognized and dealt with immediately in a Pig man Snake woman marriage! When they feel crossed or slighted, they are both equally capable of malicious retribution. This may sound like an awful lot of gloom and doom, a dire warning to avoid this situation at all costs.

If you’ve made it this far, perhaps you have the particular mix of perseverance and romanticism required to make a real go of it. When a Snake man and Pig woman in love can work out their mutual differences, their combination of intuition and logic make them a competent duo. They are then able to handle any obstacle and stumbling block that wanders into their path.

Sexually, the male Pig and female Snake should be the most careful. On the one hand, it may just be safer for everyone involved to just back away slowly with hands raised and look elsewhere for companionship. On the other end, the native passion of both these Chinese astrology signs is that it will inevitably be as memorable as it is short-lived. 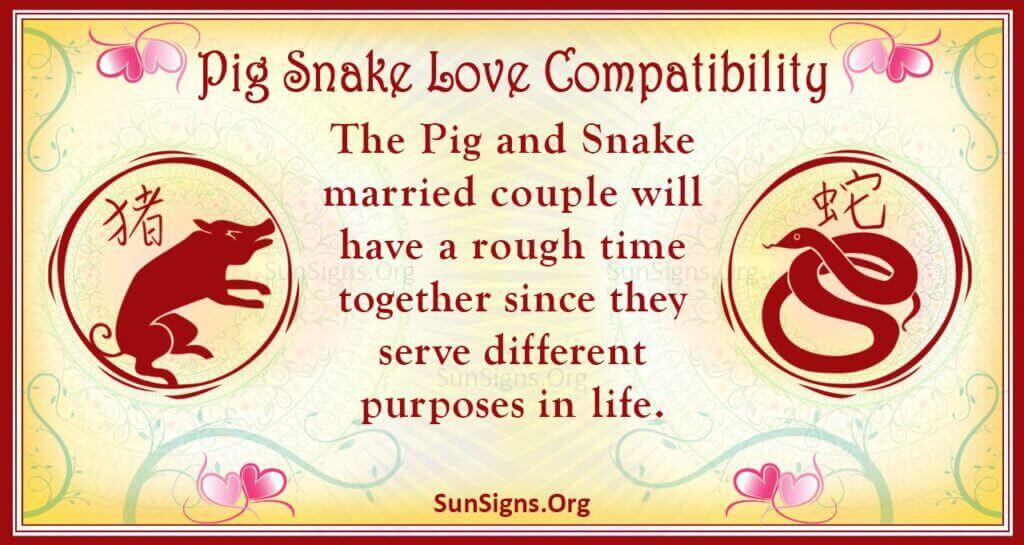 It is entirely possible to make this Pig and Snake relationship in bed work, but caution and communication at all times. There will be ups and downs, hot and cold streaks. Be undaunted and steadfast. To an outsider, it may seem that the bedroom spawns drama and intrigue beyond belief. Those who do not live and love in passion unbridled are incapable of understanding the allure.

Chinese astrology compatibility predicts that business is yet another venue in which the point cannot elaborate enough. It will require an immense and ongoing effort on both the Pig and Snake to keep offending one other.

However, this is an area where when those differences are exploited for mutual benefit. The duo can be incredibly successful at whatever they put their collective effort toward.

Rather than crushing competition, the Snake and Pig match will do best when acting on their own innate impulses. The Chinese Pig can bring to bear immense power of persuasion, turning enemies and obstacles into ardent supporters, while the Snake uses intuition and appeal to be a natural diplomat.