Birthday Number 2 – Born On The 2nd Day Of The Month

What does number 2 mean in numerology? As it turns out, it means a great deal. The day you are born on can determine who you are and what you like to do. It may even help determine who you will become and where you will go in life. Those born on specific days and times tend to have certain personality traits. This define them different from those born on other days and times. Like those with birthday number 2.

How do you calculate your birth number? If you are born on the second of the month, then you are a number 2 person. The number 2 has symbolism for the moon. The number 2 and the moon symbolism hold great meaning for those born on the second of the month. Number one and number two people are good together even though they have some different characteristics.

Being ruled by the moon, the number 2 people can be dreamy and unpredictable, but everyone will love them. They can change with the tides so one day they can be sweet as an angel, but another, ruthless when hurt deeply. Their lucky number is, of course, number 2! But also any numbers that have the number 2 in it or that are multiples of 2 such as 4.

The lucky color for those born on the 2nd of the month is green. Birth number 2 people should avoid dark colors such as red and purple. Their lucky stone is jade, and they should carry this with them whenever they can. Also, pearls and moonstones are fortunate for them. 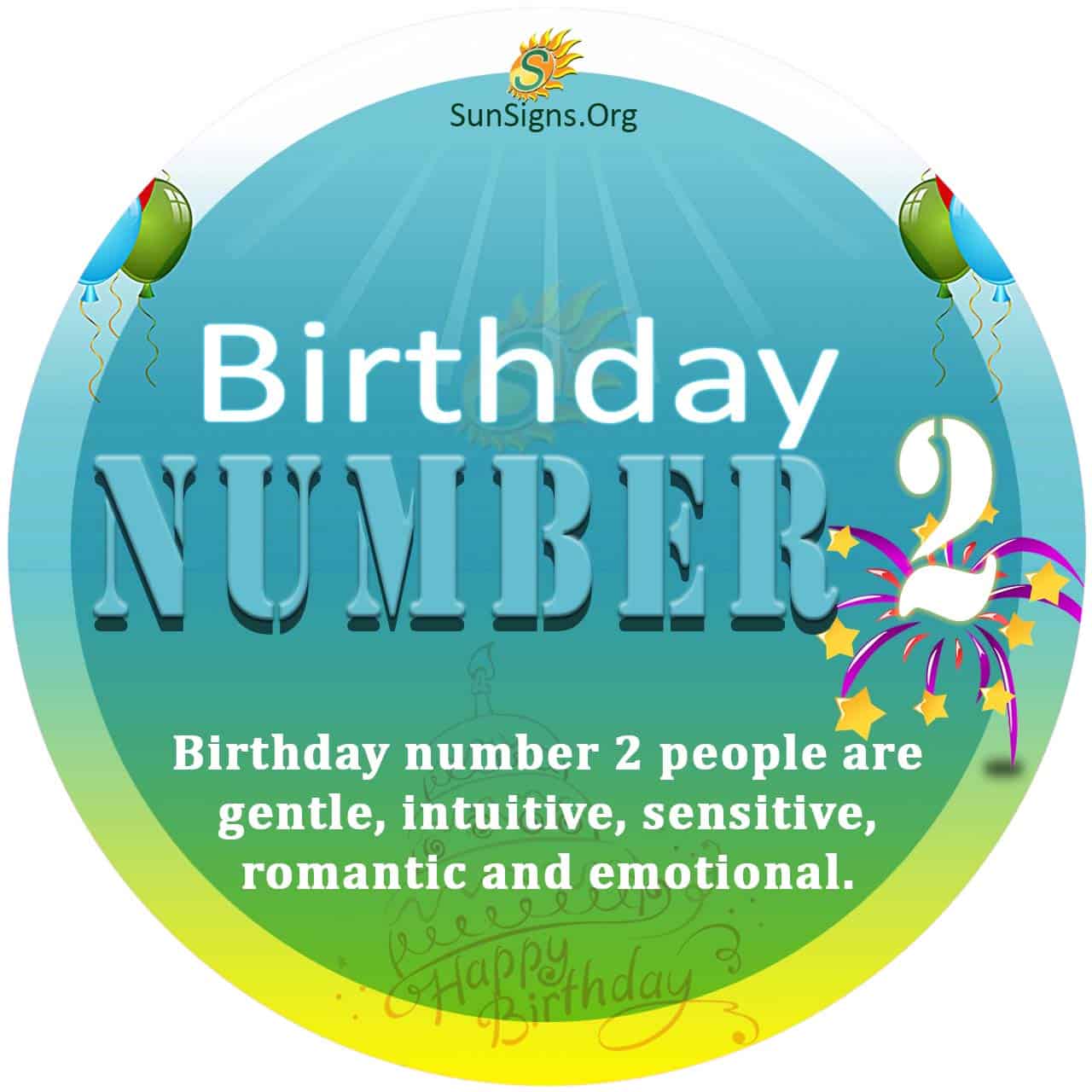 Born on the Second – Personality

Birthday number 2 people are gentle, intuitive, sensitive, romantic and emotional. They can be very vulnerable and easily hurt because of their sensitivity. They have to be careful who they trust. Also. they are inventive and creative but not forceful in carrying out their ideas. They are against violence or extreme force in any manner.


Birthday number 2 people prefer mental activities to physical ones. They are not as strong as others, especially number ones. They are creative and imaginative but like to work with others. Persons born on the second day of the month tend to have a great intellect and vision about themselves. This is all due to the moon’s influence. If they act by their idea, then they will have great success.

They also have a vision about others and the world. They are idealistic, imaginative, and they have a great love for others. Birthday number two people are tolerant even when others get angry and lose their tempers. They are good at resolving conflicts through arbitration and mediation. They are thoughtful and considerate of others’ feelings. Also, they would make a good partner.

However, birthday number 2 are not strong in relationships and love until they settle down later in life. They will sacrifice their lives for their family, and their family would probably sacrifice for them as well.

They are generally neat and tidy people who prefer order rather than a mess or chaos. Also, they prefer discipline and hard work to laziness or slack. Many great poets, writers, musicians, actors, scientists, and spiritual leaders have been born of the second of the month. They are skillful in writing and speech. They also have musical and artistic talent.

Sometimes birthday number 2 people can be moody and get off track, and this is where things can get tough. They can be restless, insecure and unsettled. Thus, they can also be overly sensitive and tend to get depressed or melancholy in unhappy surroundings. They have to be careful of themselves and their surroundings due to this moodiness and sensitivity.