The Moon in Aquarius people are out to save the world and do not like doing routine boring stuff. What you need to understand is that it is not yet over for you. Besides, your intuition is designed to push you to the level that you want. More so, every champion will not quit because they understand that with time they will become better people. Equally, try to set an example where everyone can look up o because you are brave and strong enough to face what they cannot face.

What happens when the Moon is in Aquarius? Sometimes you need to have a plan to go through certain stages in life. Besides, you will become a product of the things that you are doing now. Therefore, it is time to win over your mind and concentrate on the things that will bring perfection. Notably, you are great because you can give your gift to the world.

The word that comes to mind for the Aquarius zodiac sign is unusual, and they would agree! They revel in being quirky, and the Moon in Aquarius’s appearance intensifies their need to be different from others. The Moon represents your emotions and innermost desires. And for Aquarius, that includes pride in their uniqueness.

The main concern for the Aquarius man or woman is not getting bogged down by trivial matters. They often feel “above” petty things in life. Also, they would rather focus on heavier matters that affect the world. They tend to be humanitarians with ideas and theories that could change the course of history.

Positive Traits of the Moon in Aquarius

As an air sign, the Aquarius sun sign is all about mental stimulation, and they are highly intelligent. And because the Aquarius moon people prize being unique, they are tolerant of others who look, think and act differently. They give others a lot of freedom and personal space. And they the same while coming together every once in a while to exchange ideas. Despite their independent streak, they are also social beings for the sake of bouncing ideas off of people.

Is Moon in Aquarius Good or bad?

They accept all walks of life into their social circle and enjoy getting a variety of perspectives on the world. And with the Moon in Aquarius, they can be very entertaining with their sense of humor and creative way of looking at things.

You learn something new every day being around an Aquarius, for they love to build on their wealth of knowledge. Because they go beyond listening to the social norms, they learn about every aspect of an issue before forming an opinion. 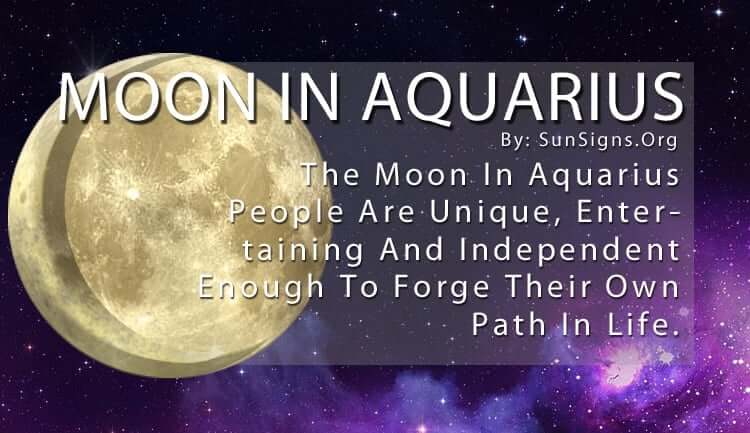 Negative Traits of the Moon in Aquarius

The Moon In Aquarius astrology doesn’t care about feelings or mood, for those things rarely further their cause. This can make them seem aloof or detached. But they see things in a different way than others do. And they get so caught up in their own vision that they sometimes forget about those who have another opinion.

Since they aren’t very emotional, the one thing that surprises people about the Aquarius moon sign is their ego. Lunar Aquarians are extremely proud of going against the grain and anyone who insults that hurts their pride. Because they try so hard to be unlike anyone else, it deflates their sense of self when people criticize their way of thinking or doing things.

Generally, the Moon in Aquarius husband is always courageous because they can dare to face every challenge in life. Besides, every man will need to be courageous in order to get what they want. Also, Moon in Aquarius’s spouse should accomplish every work they are designed to do. Notably, the relationship is the most challenging part of life because you can not get what you want if you cannot do what is right.

But their response to this is to continue on their way and not succumb to anyone else’s ideas of what they should be doing. They don’t need to listen to others when they already know their way is right. Besides, listening to others’ ideas is a great thing because you can learn something that you don’t know.  Always work hard and be curious about who you will become.

Benefits of Moon in Aquarius

The only thing the Moon in Aquarius mother has to be careful of is being forgetful. Because they don’t care about the little things (they are more concerned with the big picture), they tend to let real-world responsibilities slip.

They aren’t the most reliable people when it comes to taking care of dull errands and chores because they’re monotonous and boring. But give them an activity that will have a significant impact on others, and they will complete the task to the best of their ability. You never know what you’re going to get with an Aquarius Moon person!

Today you need to make a decision that will take you from surviving to winning. Besides, your greatest storm is the people around you who cannot push you forward instead do things that will bring you down. So, your first priority is to stay away from them. Also, Moon in Aquarius wealth represents your wisdom. Actually, wisdom is the key to unlocking doors that will bring success to everyone around your surrounding.

Lunar Aquarians especially seem to lack compassion because they are incredibly independent. They forge their path with everything in their lives, sometimes leaving their loved ones behind for a time. But their desire to help the greater good always brings them back to reality. Sometimes when you do your things alone, you can see a better vision. In other words, your focus does matter because you will see everything the way it should be without any disturbance.