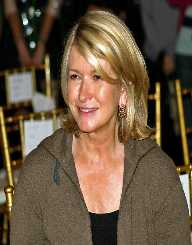 Media Queen Martha Stewart is an American businesswoman, entrepreneur, TV host, and a multi-millionaire. She is recognized as one of the 50 Most Powerful Women by the Fortune magazine. Millions of people around the world are familiar with Stewart’s name and live by her lifestyle advice.  She is also the founder of Martha Stewart Omnimedia. She is also a former model and a writer.

Born on August 3, 1941, Martha Stewart is the second eldest child of Edward Kostyra & Martha Ruszkowski Kostyra who had six children. Her star sign is Leo, and she was born in Jersey, New Jersey, U.S. When she was three years old, the family shifted to Nutley where she spent her childhood.
Education

Martha Stewart studied at the Nutley High School. She then attended Barnard College and graduated with a degree in architectural history.

When Martha Stewart turned 10, she started babysitting. While this wasn’t much of a career, it taught her how to earn for herself. She began appearing in TV commercials, by the time she was 15. She also became a model for big clients like Chanel making a hefty amount of $50 per hour. This helped her pay off her college fee.

Career as a businesswoman

Martha Stewart's first business was a partnership with her friend Norma Collier. Their joint venture in 1976 achieved considerable success after which Collier decided to leave. Martha bought her shares and became the sole owner of the business.

A few years later, Martha Stewart came into contact with Alan Mirken from Crown Publishing. With Mirken’s help, she was able to finish her first cookbook titled Entertaining. The book was released in 1982 and contained her best recipes.

Inspired by the success of her first book, Martha Stewart released two more. Martha Stewart’s Quick cook came out in 1983 and was aimed at busy people who needed some quick recipes to fit into their lifestyle. A year later, she released Martha Stewart’s Hors D’oeveres’ which contained over 150 party recipes. All her books met with great success, and she began to be covered by famous magazines. Her tips on lifestyle and homemaking quickly became popular with a large American population.

Martha Stewart was accused of stock fraud in 2001 when she sold all her shares of ImClone Systems, and the stocks fell by 16 percent the very next day. She was found guilty in 2004 and was sentenced to a five-month jail period. She was released in 2005.

After getting out of prison, Martha began hosting The Martha Stewart Show on NBC. Her book Martha Stewart’s Homekeeping Handbook: The Essential Guide to Caring for Everything in Your Home came out in 2006 and became a best-seller.

Martha Stewart met Andrew Stewart just after college. She was 20 when they married each other in 1961. Four years later, their daughter Alexis was born. The couple remained together for 29 years and divorced in 1990.

Martha Stewart has also dated Anthony Hopkins.  Stewart is rumored to have been struck by lightning thrice – a claim she has confirmed on multiple occasions.