The Mars In Taurus: Significance and Meaning

The Mars in Taurus people are people who take time in doing things but do it perfectly.


The Mars In Taurus: Personality

Because of their incredible stamina, Taurus takes their time to do everything right the first time. And with Mars in Taurus, they are especially patient when it comes to building stability. They can’t be rushed into anything they don’t want to do, for they possess the strength of the bull.

Mars in astrology represents the will power that drives us, our basic primal instincts. And for Taurus, that includes their immense staying power. Whatever their goal, they have the drive and endurance to make it happen. It may take some time. But they won’t quit until the task is completed to the best of their ability. Their stubborn nature doesn’t allow for anything else. 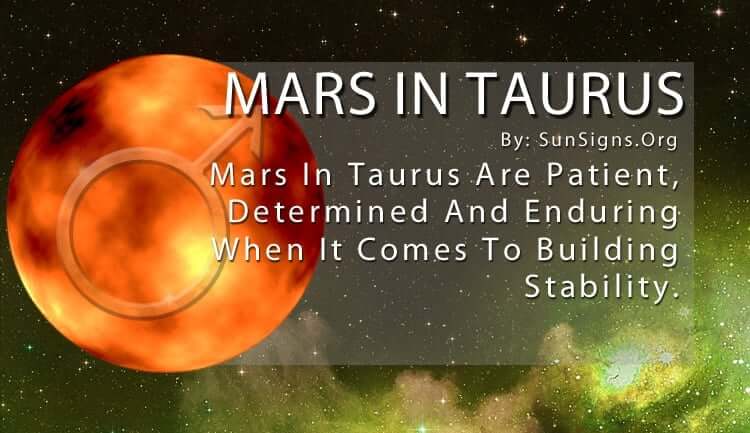 Positive Traits of the Mars in Taurus

With Mars in Taurus, their determination is the strongest of almost all the star signs. Because they value comfort and security, they work hard to ensure their home and their lifestyle is exactly the way they want it.

Being homebodies, they treasure a cozy environment in which they can relax after a tiring day. And they enjoy beautiful things. Thus their home is usually filled with expensive but tasteful accouterments. They enjoy the feel of soft fabrics and comfortable furniture, so their living room is a great place to unwind.

Thankfully Taurus Mars people have incredible patience, so it takes a lot to anger them. However, when their buttons are pushed too far, they will unleash their violent temper. And you’ll never see it coming either. For they can go from calm to enraged in a matter of moments. Give them some space to calm down and think things through, and they will eventually return to normal.

Negative Traits of the Mars in Taurus

And when Mars is in Taurus, they can be downright lazy when they’re ready to lay back. That’s not to say they don’t get anything done. They work hard all day and then relax all night. They can’t be forced to do anything they haven’t included in their agenda. This is the one place their stubborn streak can be quite annoying to some.


They are not too flexible and despise when other things get in the way of their plans. Their precise nature comes out when they’re putting together a to-do list for the day, and figuring out potential problems is not included.

Never try to alleviate a situation for them, because they won’t budge until they’re good and ready. This can be frustrating for some. But those who know their Taurus understand they don’t have the capacity to move any faster. And this is often a good thing for it means they’re taking care of everything that needs to be done.

They are one of the most reliable signs in the zodiac, and they are very loyal to their inner circle of friends, family and loved ones. And Mars in Taurus is a steady partner for anyone looking for a long-term commitment. Even though they aren’t as passionate as other signs, they are romantic and sensual in their way. They enjoy light caresses and slow foreplay at the beginning, and they can go all night pleasing their lover.

This kind of resilience works well in all areas of their life and the lives of those around them. While Mars in Taurus may seem boring to some, to others, they are a rock off of which they can build a solid and secure future.