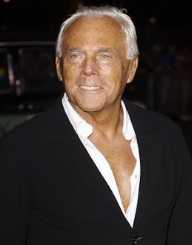 Before establishing his own fashion company, Giorgio Armani served as a window dresser at La Rinascente. Later he started to design men’s clothing. His fame came when he began to venture into freelance work. It was here that he met fashion icons such as Sergio Galeotti who encouraged him to fathom further. It wasn’t easy for him since he was still a novice in the industry. But fate proved to him that nothing was impossible.

In a short span of time, Giorgio Armani started to partner with notable fashion houses including Bagutta and Hilton. When he realized that he was an expert he launched his own company called Giorgio Armani and Galeotti. He continued to prosper to the point of designing incredible outfits for Lady Gaga.

Giorgio Armani is fully known for his confidence and right intuitions. In other words, he is fully aware of what’s happening to his life. He is an excellent figure to his internal world, although he keeps it as a secret. His private life and undefined nature act as a strong testament to his mental strength.

When it comes to career, he prefers to let it all without any judgment. He is a perfect blend of kindness, cooperation and most of all diplomacy. These are one of the positive qualities that encourage him to aim for the highest. Most of all his workmate and close friends seem to rely more on his guidance.

His friendly nature has allowed him to employ his family members in his line of work. This is one of the reasons that will make Giorgio Armani to be forever remembered as the most influential fashion designer of the 20th-century.

On 11 July 1934, Giorgio Armani was born in Italy, Piacenza, Emilia-Romagna to Ugo Armani and Maria Raimondi. His father served as a shipping manager. As a child, Armani wanted to know more about human anatomy. This made him major in the medical field. He joined a local high school where he later went to enroll at the University of Milan. He joined the Department of Medicine but dropped after three years to join a military force.

After Giorgio Armani sent out from the military, he landed a job in Milan where he worked as a window dresser. He then took a salesman position in a menswear section. He remained in the position for seven years, and this is where he took advantage of his job. He self-taught on matters that pertained to marketing and fashion.

In the mid of 1960, he teamed up with the Nino Company where he acted as a menswear designer. At the same pace, he started work as a freelancer when he transported his design to various fashion icons. The same century, he met with an architectural draftsman known by his name Sergi Galeotti. They continued to inspire each other as good friends, but Sergio inspired Armani to launch his label.

Giorgio Armani continued to work as a freelancer for companies like Gibo, Allegri and Hilton. But he didn’t let go of his business-minded idea. As a freelancer, his designs targeted extensive and wealthy persons. As a result, Armani launched his own label with the help of Galeotti. In 1975 the two designers’ partnered where they formed a fashion company called Giorgio Armani S.p.A in Milan. It was here that he continued to introduce his latest designs including ready-to-wear designs for unisex.

Early in 1979, Giorgio Armani launched another branch, the Giorgio Armani Corporation in Italy. It was here that he introduced his other line of work. At a slow pace he began to come up with other accessories such as Swimwear and underwear.

In 1980 his company launched another line of work; the Armani Junior, Emporio Armani and Armani Jeans lines. He then conducted a thorough research where he came up with best Hollywood cosplays that were used in over 100 movies. His incredible work has allowed him to dress several of notable celebrities such as Mean Fox, Anne Hathaway, Penelope Cruz and many more.

In 1979 Giorgio Armani was awarded with Neiman Marcus Award for displaying the most unique service in fashion. He followed it up with Geoffrey Been Lifetime Award from CFDA in 1987. At 82 years old; Armani calls his siblings, nieces and nephews as the best of them all. He concentrated more on his career to the point of becoming a stable bachelor. Besides, Armani is a teetotaler, non-smoker and a vegetarian. When not busy Giorgio loves to watch a football and basketball match. To date he is the acting president of Olimpia Milan Basketball.