Uranus in the Second House of the Natal Chart

What does Uranus in 2nd House mean? You want to have the best of everything in life and are ready to work hard for it.

The ingenuity of Uranus in the second House comes from solving problems, whether at work or in your personal life. While you are fairly traditional, you can think outside the box when necessary. This Uranus sign personality prefers checking out tried and true methods first before looking elsewhere.

Uranus represents invention and independence and challenges people to change up their thought process. For the second House, you tend to be pretty set in your ways, but Uranus adds a quirky twist to your personality. 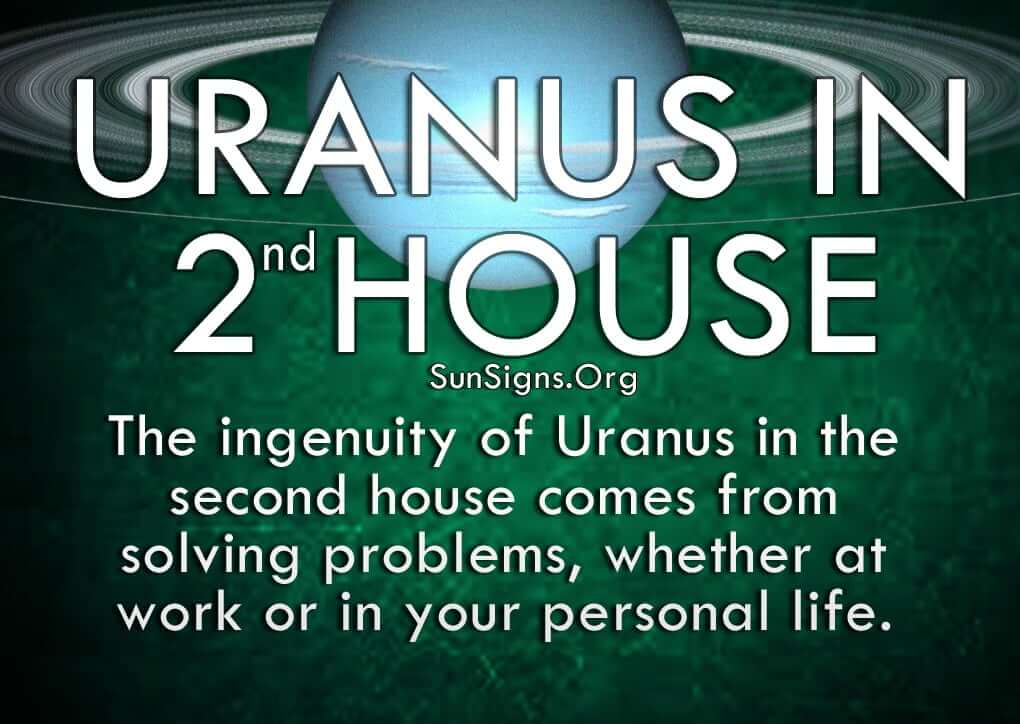 With Uranus in 2nd House in your horoscope, you love beautiful things and material possessions, but your taste in art is often unique compared to other people’s taste. Aesthetically pleasing can mean many things to many different people, and you like to go against the grain when it comes to mainstream art.

You pride yourself on finding individual pieces of art that move you and fit in with a collection that was not bought altogether for that purpose. And thankfully, you have the budget to afford these precious items because you are a very hard-working individual. While your style may be different from others, your logical thinking keeps you in line with your career. You have a nice solid nest egg built up for any occasion.

Uranus in 2nd house astrology shows you want to live your life how you want, without worrying about finances or practical needs. Comfort is a big thing for you, and you need to set up your home a certain way to achieve that. That’s why you work so hard to be good and efficient at your job and your marriage.

You use your creative mind to solve problems and move things forward in an effective manner, and people appreciate your ability to get things done right the first time.

The only problem is with Uranus in 2nd House, you take your time coming up with such solutions, and sometimes a quick response is needed. It’s here you become flustered and annoyed with people trying to push you to do things faster, and your stubborn nature takes over and gives them the cold shoulder (As Taurus is the ruling zodiac sign for the 2nd House).

While you pride yourself on taking your time, it’s not always the best way to do things. Practice coming up with spontaneous answers to problems as if you don’t have the time to focus on them. You’ll become much better at making quick but still rational decisions. Find out if you are a rebel?

The one thing you have to be careful of is always thinking you know best. While you use logic and reason to come up with your beliefs and conclusions, not everyone will feel the same way. But you can be stubborn at times and dismiss someone simply because they disagree with you. Learn to listen when someone has a different opinion and try to see where they are coming from.

In Astrology, Uranus is a generational and outer planet. It holds great significance in the lives of innovators, scientists, and engineers. It rules over Science, Technology, Engineering, and Computer Science. This planet focuses more on the future rather than the present life.

It is the ruling planet of Aquarius. It was discovered in 1781 during the French Revolution; therefore, it is a revolutionary planet. Uranus is known as the Awakener in astrology. It makes us want to become better with every day that passes by.

Uranus in the 2nd House Meaning and Finance

Uranus in the 2nd House natives have a great relationship with money. You know how to make good use of your finances, and that is why you are always secured even when financial difficulties abound.

Achieving a stable income takes a lot of sacrifices and effort. What is the importance of Uranus in the Second House? This placement enables you to use your intelligence to know how to spend your finances. Having that Uranus is a planet with rapid changes, be careful how you plan with your income.

Uranus in 2nd House astrology urges you to develop great saving habits. Stop being an impulsive spender and focus on the things that matter.

Uranus in the Second House and Values and Beliefs

Uranus in 2nd House meaning focuses on the things and people that matter most to you. Your values form an important part of your life. You have the tendency of not accepting people’s values because you enjoy your value system more.

A fresh perspective is never a bad thing, and in some cases, this will help the Uranus in 2nd house personality to have all the information before making a decision. It’s human to be wrong once in a while, and it’s better when you can admit that to yourself.

People will appreciate your humility over your egotistical defiance, so learn to let go of the perfectionist attitude. Let loose and allow your creativity to run wild once in a while, and you will be refreshed and rejuvenated. You’ll see things in a whole new light and find a different kind of beauty in the world.