Those born between April 21 and May 21 fall under Taurus, the second sign of the zodiac.

Represented by the bull, these people are steadfast and rational with an outlandish temper if pushed too far. Ruled by the planet Venus, goddess of beauty, they enjoy beautiful and romantic gestures of love.

The Taurus sun sign is found between the 30-60th degree of the zodiac. It is an earth element with a fixed modality, and is ruled by a planet identified with the Roman goddess Venus and her Greek counterpart, Aphrodite.

In Greek mythology, Taurus is also linked with Zeus, who it is said changed into the form of a large white bull to abduct Europa, a Phoenician princess.

There is another myth where Zeus turned a mistress of his into a heifer to hide her from his wife, Hera. But the bull is seen in other cultures as well, such as early Mesopotamian art.

There is a picture of the “Bull of Heaven” standing before Inanna, the Sumerian goddess of sexual love, fertility and warfare. And this depiction followed into the Egyptian’s Dendera zodiac, where the Taurus star sign was associated with the renewal of spring. 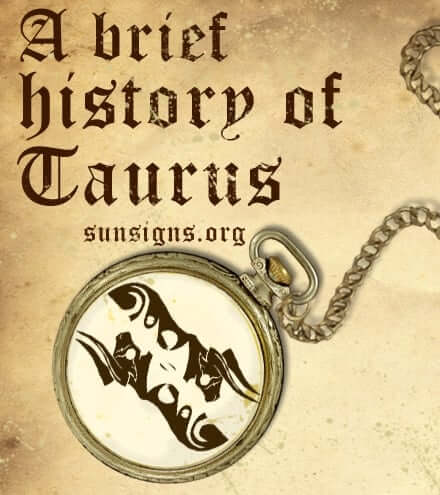 Taurus means bull in Latin, and the constellation sits between Aries and Gemini. The brightest star in the constellation, the red giant Aldebaran, is said to be the eye of the bull watching the hunter Orion that sits to the southwest.

Taurus is believed to be one of the oldest constellations recorded, as early as the Copper Age in the late 5th century BC. And in the Babylonian zodiac it was called as “The Heavenly Bull.” The other aspects of this horoscope sign, the earth element and the fixed modality, have to do with how nature has been divided.

Empedocles, a 5th century BC philosopher, also recognized the four elements as earth, fire, water, and air. The three modalities are cardinal, fixed, and mutable.

Where Taurus falls in the months and seasons, people are planting their new harvests and making sure the earth is fertile enough to support growth. Therefore, those born under this zodiac sign are seen as more grounded and practical in nature, and are not fond of change.

Other personality traits associated with Taurus zodiac sign are the anatomy of the neck and throat, which holds its head up high and backs down for no one. The metal associated with the bull is copper, which comes from the era in which the constellation was first recorded. And the color that goes with the Taurus sign is green, a muted color that reflects the green grass and blossoming plants and flowers of the season.

Just as with the bull, the Taurus man or woman does not like to leave home. They prefer to graze in their own pasture and spend quiet time with their loved ones. They are strong with great stamina, which reflects the connection with Zeus, but they also enjoy all the beauty the world has to offer.

This brings them back to their ruler Venus and her association with beauty and romance. They are gentle souls with nurturing qualities and a strong mind, who will charge only when provoked. With such a long and prominent history, it’s no wonder the Taurean is a proud individual.