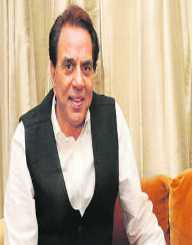 Dharmendra; was born to Kewal Kishan Singh Deol and Satwant Kaur in 1935.; His ancestral village is Dangon. His father was a schoolmaster.

Dharmendra grew up in Sahnewal and attended the Government Senior Secondary School at Lalton Kalan, Ludhiana. His intermediate school was Ramgarhia College in Phagwara. He finished school in 1952 at age 17.

Many critics consider Sholay to be Dharmendra’s finest film.; The India Times rated it as one of the “Top must see Bollywood films of all time.”; This action-adventure film was directed by Ramesh Sippy. Sholay was recognized at the 50th Filmfare Awards, receiving a special award: The Best Film of 50 Years.

A number of the tunes from Sholay have been included in the Binaca Geetmala list of top film songs.

At age 19, Dharmendra married Parkash Kaur in 1954.; They had four children together: Sunny, Bobby, Vijeeta and Ajeeta. In 1960 Dharmendra won the Filmfare New Talent Award and moved to Mumbai. As a young boy, he had been a fan of the actress Suraiya and used to walk long distances to see her films. This adoration ignited his love of film and fueled his determination to become an actor.

His second wife, whom he married in 1980, is actress Hema Malini.; Hema Malini was originally promoted as the Dream Girl and acted in the film of the same name.; Dharmendra and Hema; appeared in several films together, including Solay. They; have two daughters, Esha and Ahana.

Dharmendra met Hema Malini on the set of the movie Tum Haseen Main Jawan (1970). Things were complicated because Dharmendra; was already married with two young sons. However, they fell in love, and five years later, in May 1980, they got married. This was brought about because of their conversion to Islam. By changing religion, Dharmendra was allowed to take a second wife. (The Indian Times).

Hema Malini claims she fell for Dharmendra when she heard him singing; Main Jat Yamla Pagla Deewana. Despite; the opposition, their marriage has stood the test of time. He was quoted recently as saying that after over thirty years of marriage, she is still his Dream Girl. Dharmendra’s younger brother was actor and director Ajit Deol. Ajit Deol was the father of Bollywood actor Abhay Deol.

Dharmendra, a member of the Bharatiya Janata Party, was elected a Member of Parliament in 2004.

He represented Bikaner, Rajasthan. There was a controversy about a remark he made in relation to democracy and becoming a dictator viz. Dictator Perpetuo. Dharmendra was severely criticised for it at the time. He as also criticised for rarely attending Parliament.

Moving to Mumbai in 1960 after winning Filmfare magazine’s new talent award, the good-looking, charismatic young man soon found work in the film industry playing romantic heroes opposite leading ladies. These films focused on the female lead and were aimed at a largely female audience. Later this changed when Dharmendra’s appeal as an action hero was recognized.; Phool Aur Patthar (1966) was his first action film.;

After arriving in Mumbai to seek fame and fortune in the film industry, Dharmendra initially worked for the American Drilling Company. He soon found work in film; and made his acting debut in Dil Bhi Tera Hum Bhi Tere (1960). This was followed up by a role in the film Boy Friend. Dharmendra met the actress Meena Kumari when he worked with her on Main Bhi Ladki Hoon (1964). She was instrumental in helping him establish his acting career.; Playing a villain who won redemption through the love of a woman in Phool Aur Patthar (1966) made him a star.

Dharmendra’s role in this successful film resulted in his first Filmfare Best Actor award nomination.; Following this, he won accolades for his role as a sensitive poet in Anupama (1966). A few years later he received another; Filmfare Best Actor nomination for his Mera Gaon Mera Desh (1971).; Dharmendra had a successful partnership with Pramod Chakravarthy in the 1970s.; Chakravarthy directed; him in Naya Zamana (1971), Jugnu (1973) Dream Girl (1977) and Azaad (1978).

In 1983 Dharmendra started a production company. Betaab (1983) was his first production. This Hindu romance; introduced; actors Sunny Deol (his son) and Amrita Singh. The film turned out to be one of the most successful Bollywood films of 1983.; Amongst other films in the 1980s, in 1986 Dharmendra; appeared in a cameo role in Mohabbat Ki Kasam which was directed by K. Pappui.; In 1987 Dharmendra produced Ghayal. This film was a huge success and won seven Filmfare Awards including the Filmfare Best Movie Award.; In the same year, Dharmendra starred alongside Rati Agnihotri in the Bollywood film Hukumat directed by Anil Sharma. It was; highest grossing Bollywood film of 1987.

Dharmendra took a four-year break from acting in 2003. Returning with some; number of notable movies.; One was Life In A Metro (2007).; His role was that of a seventy-year-old man returning to his homeland in search of his first love.

This critically acclaimed Bollywood musical drama; was written and directed by Anurag Basu. Notable to Bob Dylan fans because of the use of his classic “I Want You’ used in the film. All other songs were by Pritam, including one he wrote before he became successful.

Overall, Dharmendra has had; roles in over 288 films. He had a successful; collaboration with Arjun Hingorani which ranged from 1960 through until 1991. In fact, Dharmendra’s first acting role was in the very first film that Arjun Hingorani directed.; Another successful partnership was with Pramod Chakravarthy.