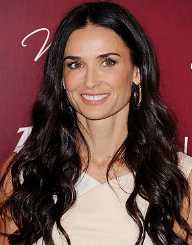 American actress Demi Moore was born on the 11 November 1962 in Roswell, New México in the United States to Virginia King and Charles Harmon. Her parents divorced when she was young, and her mother remarried Danny Guynes. During her upbringing, the family moved multiple times with her stepfather eventually taking his own life.

Demi Moore was a pupil at Fairfax High School in Los Angeles but dropped out at 16.

In the early years of her career in Hollywood, Demi Moore was considered to be one of what was known as The Brat Pack. Other members included Sean Penn, Molly Ringwald, Emilio Estevez and Judd Nelson. At one time she was engaged to Estevez.

A record was set when Moore was paid over $12 million for Striptease when she became the first actress to reach a $10 million fee. The film was a disappointment at the box-office, and she was given a Razzie Worst Actress award in 1996 for the film. Demi Moore was given the award again in 1997 for her performance in G.I. Jane.

Demi Moore has won many nominations and awards. Moore won a Saturn Best Actress Award for her role in Ghost (1990). The 1995 ShoWest Award: Female Star of the Year and MTV Movie Award for Sexiest She-Villain for Charlie’s Angels: Full Throttle (2003).

Between 1980 and 1985 Demi Moore was married to Freddy Moore. She then married actor Bruce Willis, and they had three daughters together before divorcing in 2000. Her third marriage was to Ashton Kutcher (m.2005-div.2013). Demi Moore had three children with Willis: Rumer, Scout LaRue, and Tallulah Belle.