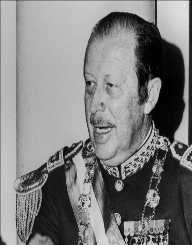 Born on November 3, 1912, Alfredo Stroessner was a Paraguayan military officer who ascended to the presidency of that country through a coup d’état in 1954 which toppled the Federico Chavez government. Alfredo Stroessner served as the president for 35 years and left for exile after Alfredo Stroessner was overthrown in a bloody coup d’état in 1989. His reign is ranked the 20th longest non-royal president since 1870. Alfredo Stroessner who was backed by the United States of America during the coup to the latter part of his reign became one of the brutal head of states in Southern America. He introduced “state of siege” which annulled the Paraguayan constitution and suppressed all other political opponent turning the country into virtually a one-party state.

Alfredo Stroessner was born on November 3, 1912, in Encarnacion, Paraguay to Hugo Strößner and Heriberta Matiauda. In 1929 at age 16, he entered into the national military school and came out as a lieutenant in 1931.

Alfredo Stroessner fought in the Battle of Boqueronas a volunteer artillery cadet during the Chaco War against Bolivia from 1932 to 1935. He gradually rose through the rank to become a major and in 1946, joined the general staff. Stroessner gained grounds in the army and commanded the artillery division at Paraguarí during the Paraguayan Civil War in 1947. Alfredo Stroessner ensured the war went in favor of President Higinio Morinigo by destroying the rebel-held Asuncion. Stroessner’s loyalty and commitment to Marini made him one of his favorites of and was promoted in a frequent manner. Alfredo Stroessner was able to enter into the higher ranks of the Paraguayan army making him have political and social influence in the country.

In 1948 Alfredo Stroessner became the youngest general officer in South America as he rose to the rank of brigadier. Alfredo Stroessner earned the nickname Colonel Trunk when he was driven in the trunk of a car to the Brazilian embassy after a failed coup attempt in 1948. Afterward, he successfully backed Felipe Molas Lopez during his coup against  Juan Natalicio Gonzalez and later turned against Lopez by backing Federico Chavez in his coup. He subsequently became army chief of staff in 1951.

After supporting Federico Chavez in his successful coup, Alfredo Stroessner turned against him when Chavez planned to arm the Paraguayan national police. On May 4, 1954, Alfredo Stroessner removed him from office through a coup d’état. Tomas Romero then became an interim president and arranged for a special election on July 11, 1954, which Alfredo Stroessner was the only candidate. After his first term, he contested again in 1958 winning with a large margin of over 80 percent. Alfredo Stroessner subsequently contested in1963, 1968, 1973, 1978, 1983 and 1988 and won all making him the longest-serving president in South America aside Fidel Castro.

Alfredo Stroessner ruled for 35 years and was backed by the United States until the latter part of his administration. Alfredo Stroessner introduced what he called, the state of siege after he took office. The state of siege, which was, renewed every 90 days until1987allowed him to suspend the constitution and other civil liberties. During his reign, Paraguay became a close ally ofthe the United States and had economic and military assistance from them.

He was in support of the United State invasion of Dominican Republic and during the Vietnam War, offered to send troops alongside the Americans. Both countries continued to enjoy close relationship until the Carter Administration began to frown on the human right abuses that were happening in Paraguay. This posture was continued by the Reagan administration, which also severed ties with the country due to the government’s involvement in money laundering and drug trafficking.

Alfredo Stroessner's rule was characterized by the high rate of corruption and human right abuses. There was no political tolerance as his party; the Colorado remained the only legal party in the country. Opposition leaders were vilified and the country became a safe haven for war criminals including the Nazis. Alfredo Stroessner's regime became the worse in term of human right abuses in the whole of South America with3,000 to 4,000 murders, thousands of political imprisonment and torture and over 500disappearances coupled with less press freedom.

Despite all the atrocities that happened under Alfredo Stroessner's regime, he implemented positive policies, which ensured the economic growth of the country. Alfredo Stroessner built the largest hydroelectric power plant in the world the Itaipu Dam. During the 1970sParaguay had the highest growth rate in the whole of Latin America. Alfredo Stroessner equipped the military and police with most of the budget allocations going into that sector. Only 15% of the country’s budget went into education while 2% went into public works.

Alfredo Stroessner also built the Yacvreta Damon the Paraguay-Argentina border. Both dams displaced numerous people from their home, but most of them had no compensation from the government. He improved on the country’s infrastructure especially the road network and also allocated lands to the retired military officer for farming purposes.

Alfredo Stroessner came to power through coup d’état and was also overthrown by same means. As he always did, he suppressed the opposition political parties prior to the February 1988 elections even though he lifted the so-called state of siege in April 1987. The siege was only lifted by words but nothing changed on the ground as several security laws were operational. Alfredo Stroessner won the election by 89 percent to serve his eight terms in office, but his downfall was in just a few months in waiting.

The end of Alfredo Stroessner finally came when his close confident General Andres Rodriguez staged a bloody coup d’état on February 3, 1989. The coup was based on the fear that Stroessner would choose one of his children to succeed him when he steps down. His two male children who the general deemed unfit for the position were Alfredo Stroessner who was a cocaine addict and Gustavo who according to rumors was a homosexual. Alfredo Stroessner left for Brazil after the coup where he stayed for more than seventeen years until his death on August 16, 2006.

Alfredo Stroessner married Eligia Mora. The couple had three children; Gustavo, Alfredo, and Graciela. Alfredo Stroessner died at age 93 in Brasilia from a stroke. Alfredo Stroessner has previously undergone a hernia operation and also suffered series of pneumonia. All attempts made by him to return Paraguay to die were met with threats of arrests from the Paraguayan government. After Alfredo Stroessner was overthrown, all edifies, places and institutions named after him were renamed including the Asuncion airport which was changed to Silvio Pettirossi International Airport.