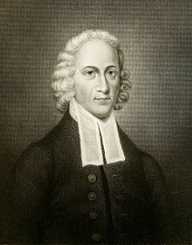 Edward Young was a prominent poet of the 18th Century. His poem ‘Night thoughts’ is one of his important works. He wrote it in memory of his wife and a step daughter who died within years of each other. It was illustrated by William Blake in 1797 and by Thomas Stothard n 1799. His ‘The Conjectures’ was hailed as an excellent piece in English literary criticism.     It inspired the “Sturm and Drang” movement in Germany.

Edward Young failed mainly because he picked patrons whose fortunes were declining.

Edward Young was born in 1683 and baptized on 3 Jul 1683. He passed his matriculation from New College, Oxford after attending the Winchester College.

Edward Young shifted to Corpus Christi and was awarded a law fellowship at ‘All Souls.’ He received the Doctor of Civil Law Degree in 1719.

Edward Young’s first publication an ‘Epistle to….. Lord Landsoune’ was written in 1713. He then wrote ‘A poem on the Last Day’ dedicated to Queen Anne. In 1714 he published ‘The Force of Religion or Vanquished Love.’ It was about the execution of Lady Jane Grey and her husband. It was dedicated to the Countess of Salisbury. ‘On the Queen’s Death and His Majesty’s Accession to the throne’ was an epistle written in 1714. Here he showered praise on the new king.

Edward Young accompanied Philip, Duke of Wharton to Dublin in 1717 and produced the plays ‘Busiris’ (1719) and ‘Revenge’ (1721). ‘Revenge was dedicated to the Duke of Wharton. The Duke had promised annuities of £100 and £600 as expenditure. The Duke, however, failed to keep up his promises, and Young pleaded his case before Lord Chancellor Hardwicke in 1740. Young was able to get only £100 as an annuity and not £600 as expenditure. Between the years 1725 and 1728 Edward Young produced a series of 7 satires on ‘The Universal Passion.’

Edward Young dedicated these to Duke of Dorset George Bubb Dodington, Sir Spencer Compton, Lady Elizabeth Germain, and Sir Robert Walpole. He received a pension of £200 a year from Walpole. His pension was considered adequate by the king, and he did not receive any preferment.

In 1728 his satires were compiled into the collection ‘Love of Fame, The Universal Passion.’ He became a Royal Chaplain in 1728 and obtained the college living of Welwyn, Hertfordshire in 1730. Young’s work ‘The Conjectures’ was a declaration of independence against the tyranny of Classicism. It was considered as a milestone in the history of English and European Literary criticism. It was translated into German and very well received. His other writings in 1720’s include ‘The Instalment’ (1726), ‘Cynthio’ (1727), ‘A Vindication of Providence’(1728), a sermon, and ‘An Apology for Punch’ (1729), a sermon.

The poem was written after the successive deaths of his stepdaughter in 1736, her husband in 1740 and Young’s wife in 1741.  It is written in blank verse and a dramatic monologue of nearly 10,000 lines divided into nine parts or nights. It was immensely popular. It gives us the famous adage ‘procrastination is the thief of time’. In 1759 he published ‘The Conjectures on original composition.’ Here he emphasizes that originality is more valuable than imitation or classic indoctrination.

Edward Young married Lady Elizabeth Lee, daughter of Earl of Lichfield. She was a widow and had a daughter from her first marriage.

Edward Young had a son Frederick. Edward was not on good terms with his son and refused to see him. He forgave him just before he died and bequeathed everything to him.