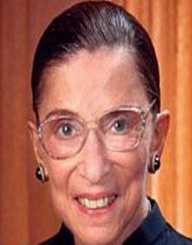 Joan Ruth Bader was born 15th March 1933, to Nathan and Celia Bader. She was born in New York City, New York, in the United States. Ruth Bader Ginsburg had an older sister, but she died at the age of six from meningitis.

When Ginsburg started school, there were several girls in her class with the same name of Joan, so Celia suggested the teacher call her Ruth to help avoid confusion. Ginsburg studied at James Madison High School. Her mother had taken an active role in encouraging her education, as it was an opportunity Celia had not been offered. She, unfortunately, got ill with cancer, and she died the day before Ginsburg graduated.

Ruth Bader Ginsburg then went to Cornell University in New York. She graduated in 1954 with a Bachelor of Arts degree. She had also met Martin D. Ginsburg at the university which she married shortly after her graduation. She had a daughter in 1955, and in 1956, she enrolled at Harvard Law School. When her husband’s work took him to New York City, Ginsburg transferred to Columbia Law School. She graduated with her law degree in 1959 and finished equal first in the class.

Ruth Bader Ginsburg found it challenging to get a start with her legal career, as women were not well accepted at the time. She had strong recommendations from senior staff at both Harvard and Columbia. She eventually gained employment clerking for Judge Edmund L. Palmieri of the U.S. District Court for the Southern District of New York, and she was with him for two years.

Ginsburg became a research associate for two years starting in 1961, and then she became associate director of the Columbia Law School Project on International Procedure. She spent time in Sweden at Lund University doing her studies, and she was pleased to note that women filled over 20 percent of the law students.

In 1963, she joined Rutgers School of Law as a professor and was in the role until 1972. In 1970, Ginsburg was a co-founder of the Women’s Rights Law Reporter. It was the first law journal for women’s rights in the U.S. In 1972, she joined Columbia and taught there until 1980. She also co-founded the Women’s Rights Project at the American Civil Liberties Union (ACLU) in 1972. She became general counsel for the ACLU in 1973, and over the next three years, she took on six gender discrimination cases and won five of them. Ginsburg did a lot of work in the gender discrimination area, and her work is explicitly credited with getting rid of gender discrimination in many areas of law.

Moving into the Judiciary

In 1980, President Jimmy Carter nominated Ruth Bader Ginsburg to a seat on the United States Court of Appeals for the District of Columbia Circuit. The position had been vacated due to the death of the presiding judge. Ginsburg was confirmed by the Senate in June. In 1993, she left to be promoted to the United States Supreme Court. She was nominated to the position of Associate Justice of the Supreme Court by President Bill Clinton in June 1993, and she received her commission in August.

While serving, she continued to work for women’s rights and gender discrimination. Ginsburg was credited for inspiring the Lilly Ledbetter Fair Pay Act which was made law in 2008, enabling employees to be able to make pay discrimination claims more efficiently. In addition to her regular duties, Ginsburg was requested by Vice President Al Gore to administer his oath of office for his second term in 1997. She was the first woman to do so.

Ruth Bader Ginsburg and the court had strengthened the case for same-sex marriages, and she became the first Supreme Court Justice to officiate at same-sex weddings. In 2012, she traveled to Egypt for several days to have discussions with law school students and faculty, judges and other legal experts.

In 2018, Ginsburg announced her support for the #MeToo movement. The movement is a safe space for women to be able to speak out about sexual harassment they have been subject to in the past. In 2010, Ginsburg became the oldest justice on the court at 77 years of age. In 2016, she reached the milestone of 23 years of service.

In 1954, Ruth Bader Ginsburg married Martin D. Ginsburg. He went on to become an internationally acclaimed taxation lawyer. The couple had two children. Their daughter is a professor at Columbia Law School; their son founded his own recording company for classical music.

In 2010, Ginsburg’s husband died from cancer.

Earlier, in 1999, Ginsburg was diagnosed with colon cancer. She had surgery and then both chemotherapy and radiation therapy. She continued to work through her illness. In 2009, she had surgery for pancreatic cancer, and once again was only off work for a very short time. In 2014, Ginsburg had a stent placed in a coronary artery.