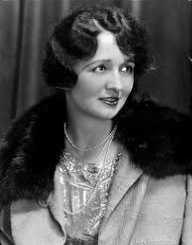 Hedda Hopper was born on May 2nd, in 1885. She was a celebrated American actress. She also earned her fame by being a gossip columnist.

Elda Furry alias Hedda Hopper was born on May 2nd, in 1885. Her place of birth was in Hollidaysburg, Pennsylvania. Her parents, David Furry and Margaret were associated with the German Baptist Brethren. At the age of three, Hopper moved with her parents to live in Altoona, Pennsylvania.

With a particular interest in acting, Hedda Hopper fled from her home and went to reside in New York City. She kicked off her acting career on Broadway. However, she did not succeed in her goals. Years later, she joined a theatre company owned by DeWolf Hopper. Hopper would then tie the knot to him.

Hopper married DeWolf Hopper in 1913. She was his fifth wife. Two years later, she debuted on the silent movies. The following year, in 1915, she earned herself her first role on notion picture in the film dubbed The Battle of Hearts. She acted alongside William Farnum in the movie.

Afterwards, Hopper rose to the limelight in 1918 after featuring in Virtuous Wives. During her entire acting career, she starred in over 20 movies.

Similarly, besides acting, Hedda Hopper also invested in writing. She paid close attention to writing in the mid-1930s. This occurred after her acting career waned. She began writing in 1935. She wrote on a gossip column for the paper called the Washington Herald. She agreed to earn a weekly salary of $892, an amount equal to about $900 in 2017.

Hedda Hopper was a passionate Republican. Similarly, she vigorously campaigned for the House Un-American Activities Committee. She also championed for women’s rights under the Women’s Division.

Hedda Hopper wedded DeWolf Hopper on May 8th, in 1913. The two had a single child together. Their marriage ended in divorce in 1922.

Hedda Hopper passed away on February 1st, in 1966. She succumbed to pneumonia. She died at the age of 80 years.