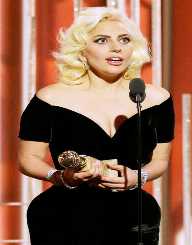 Lady Gaga (real name Stefani Joanne Angelina Germanotta) was born on March 28, 1986, in New York. She was brought up in Manhattan’s Upper West Side. She attended the Convent of the Sacred Heart - a private, all-girls Roman Catholic school. She was a very severe and dedicated student, but also very insecure about her provocative and eccentric nature.

Lady Gaga started to play the piano when she was four years old and wrote her first ballad at thirteen. When Gaga was 14, she began to perform at open mic nights. In her school, she played in lead roles and also appeared in a tiny part in The Sopranos. She studied at the Lee Strasberg Theatre and Film Institute for ten years and took classes in method acting.

After high school, she applied for the Collaborative Arts Project 21, a musical theater training conservatory in Tisch School of the Arts, New York. She was one of the 20 students to gain early admission. At the time, she was writing songs, as well as composed essays and analytical papers on art, religion, social issues and politics.

When Lady Gaga was 19, she withdrew from CAP21, deciding to focus on her music career. In 2005, she recorded a couple of songs. She also formed a band called SGBand with some of her friends. The group became a local fixture of Lower East Side club scene.

In 2006, she was recommended to music performer Rob Fusari, after performing in Songwriters Hall of Fame new songwriters showcase. When working with Fusari, she and her producer came up with the stage name Lady Gaga, after Queen’s song Radio Ga Ga. After recording a few electropop tracks, she was signed to Def Jam label but was dropped after only a few months. Devastated for her misfortune, Gaga returned to her parent’s home.

At the time she started experimenting with drugs, neo-burlesque shows, and go-go dancing at bars. During this time she met performance artist Lady Starlight, who later helped her in developing her onstage persona. Fusari kept working on songs they created together and sent them to record executive Vincent Herbert. He quickly signed Gaga to Interscope Records.

Lady Gaga also got a music publishing deal with Sony/ATV and wrote songs for Britney Spears, Fergie, and the Pussycat Dolls. Her vocal abilities were recognized by Akon from Interscope, and he later convinced the CEO of the company to form a joint deal with his label Kon Live.

Gaga secured a record deal, but there was fear of her being too underground and racy for the mainstream market. But Gaga was convinced about her abilities and knew that she would bring a new era in the music industry.

In 2008, Lady Gaga moved to Los Angeles to work on her debut album The Fame. She set up her creative team - The Haus of Gaga, modeled on Andy Warhol’s Factory. On August 19, 2008, The Fame was released. The album was number one in Australia, Canada, Germany, Switzerland, and the UK. First two singles, “Poker Face” and “Just Dance” became the worldwide success.

The album and its single “Poker Face” won two Grammy awards. While on worldwide tour The Fame Ball Tour, Gaga released her EP The Fame Monster of eight songs. The single “ Bad Romance” won 2 Grammy awards. Her albums have been a major success, becoming one of the best selling artists of all time.

In 2011, Gaga released the lead single from her new album “Born this way” which debuted the Billboard Hot 100 and became the 1000th number-one single in the chart history. In the first week of release, the album was sold in 1.108 million copies. In 2012, Lady Gaga directed a TV special “ A Very Gaga Thanksgiving,” after which she released her fourth EP “A Very Gaga Holiday.” In 2013, she released her next album Artpop. In 2014, she collaborated with jazz singer Tony Bennett on the jazz album Cheek to Cheek, which won her another Grammy.

Lady Gaga performed at the 50th annual Academy Awards, by performing a medley of songs from the musical “The Sound of Music” as a tribute to actress and singer Julie Andrews. Her performance triggered 214,000 Facebook responses. She also starred in American Horror Story: Hotel, which earned her a Golden Globe for her portrayal of The Countess.

She also played a witch in American Horror Story: Roanoke. During the filming of the fifth season of the show, she was inspired to create her next album, Joanne. She has also performed at the Super Bowl. Gaga is currently working on several acting projects.

Lady Gaga has been described as a fashion icon and a starter of a different movement in pop culture. Her fashion sense and persona has received very polarized reviews. She wore a raw beef dress to the 2010 MTV Video Music Awards. Later that year, Vogue named her one of the best-dressed people in 2010. However, it also invoked the fury of animal rights organizations.

Lady Gaga has been a significant contributor to charities for natural disasters, like Haiti Earthquake and Hurricane Sandy. She also joined MAC Cosmetics and released a lipstick Viva Glam. The endorsement has raised more than 200 million dollars to fight HIV and AIDS.

Gaga has launched the Born This Way foundation that focuses on the empowerment of the youth and self-confidence, well-being, mentoring and career development. She is also an outspoken activist for LGBT rights.

Lady Gaga was engaged to actor Taylor Kinney, but the couple parted ways in 2016. She has 12 Guinness World Records, three Brit Awards, and 6 Grammy awards. Gaga is a natural brunette, but changed her hair color, because she was often mistaken for Amy Winehouse while trying to make it big. She is also the godmother of Elton John's kids. Gaga is a practitioner or Brazilian Jiu-Jitsu, Capoeira, Boxing, JeetKune Do and Shaolin Kung Fu.