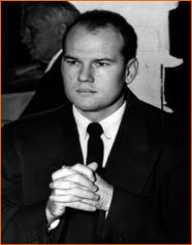 Sam Sheppard was born as Samuel Holmes Sheppard on December 29th, in 1923. His birthplace was in Cleveland, Ohio. He was the last born son to Richard Allen Sheppard.

Sam Sheppard joined Cleveland Heights High School where he was seen as a bright student. Besides, he was also active in sports, particularly American football, on track and in basketball. It is while studying in high school that he crossed paths with his future wife named Marilyn Reese.

Later, he joined Hanover College situated in Indiana. Here, he took pre-osteopathic medical classes. After that, he went on to take extra courses at Case Western Reserve University located in Cleveland. He went on to complete his studies at the Los Angeles Osteopathic School which is now identified as the University of California Irvine.

On July 4th, 1954, Marilyn was found dead in their home. This was the beginning of a lengthy court case that still stands to be recalled in the United States. According to Sheppard’s statement with the authorities, he claimed that he was hit to the ground right after he discovered his wife had been murdered. Nevertheless, the authorities failed to detect any evidence used by the assailant that Sheppard was talking about. As a result, Sheppard became the main suspect of the case.

After a series of court cases, Sheppard was found guilty and charged with second-degree murder. The court sentenced him to life in prison.

Later, in 1964, an aggressive lawyer called F. Lee Bailey took the case and helped Sheppard to earn his freedom since his arrest. Shortly after, he faced another retrial where Sheppard was found not guilty of murder charges.

After his release from prison, Sam Sheppard suffered from depression, and as a result, he turned to alcohol. On April 6th, in 1970, Sam Sheppard died from liver failure.