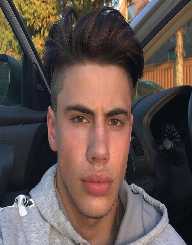 America’s emerging social media star Jackson Krecioch was born on June 1, 1998, in Wisconsin, USA. He was one of the many children born to John Krecioch and Jennifer Krecioch. In total, Jackson, nicknamed Jack, had six brothers and one sister. They are named Jacob, Joshua, Jonathan, Jorge, Joseph, Julian, and Katherine. In 2013, at a very young age, Jack lost his father in an industrial accident. His father suffered a severe brain injury, and within two months, he passed away. After the death of his father, the Krecioch family had to go through a tough phase owing to a financial and emotional crisis.

During his growing years, Jackson Krecioch became acquainted with social media. Subsequently, he opened a couple of accounts on the social networking sites Instagram and Twitter. He began to showcase the painter streak in him by posting sketches made by him on one of his Instagram accounts. The subjects of his drawings were mostly eyes and lips. Jackson was fond of drawing emotive eyes. His creativity was visible through the many shapes of the eyes that could display a variety of emotions. He drew eyes with an artistic twist to them.

Though Jackson had become famous in his friends’ circle as ‘an avid social media user,’ it was not until the mid-2015 that he found the much-desired global fame. In the middle of the year 2015, Jackson made his debut on another social networking app named ‘Musical.ly.’ He began posting videos on Musical.ly, and within a year of registering on the site, he had gained an enormous fan base. He eventually collaborated with many other social media personalities including Jordyn Jones and posted their joint works online.

The fact that Jackson Krecioch possessed captivating looks and excellent communication skills contributed a lot to his growing popularity. The teenager is a good listener and can easily break the ice by initiating engaging conversations with his fans. He is a cheerful guy who loves to interact and have serious talks with everyone he befriends. This easy-going approach and his friendly nature make him more adorable. His creative and engaging nature reflects in his videos as well.

Jackson Krecioch often posts nonsensical activity-based videos, but his fans find them funny as well. Two years after the death of his father, Jackson has managed to make a name for himself and has become world’s top internet celebrity. He has also begun using the live-broadcasting site YouNow, and within a very short span of time, his fan following on the site crossed the 76k mark. The internet sensation boasts of more than 550k followers on Musical.ly, over 700k followers on his official Instagram handle, more than 91k followers on Twitter and over 170k subscribers on YouTube.

The charming teenager had faced a tough time after the death of his father. Jackson Krecioch traveled a lot with his family. He was able to overcome the difficulties after achieving success on the Internet. Jackson recently announced his homosexuality on his YouTube channel. He was in a relationship with fellow social media star Aaron Fuller for a brief period. He is currently single and enjoying his star status on social media. Jackson dreams of becoming an actor.