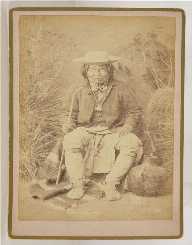 Nineteenth-century Native American Nana was born around the year 1800. The name of his parents, as well as that of his immediate family members, is unknown. He was born as a member of the Eastern band of the Chiricahua Apaches residing in the region of Southern New Mexico, United States of America. The Chiricahua Apaches tribe used to live all over Western

New Mexico. Nana was a tribal warrior well-known for his fight against the White colonization. The world remembers him as one of the chiefs of the tribe’s final battle in defiance of the White supremacy.

The Native Apache residing mainly in the southwestern parts of America, fought a battle with the White settlers from 1861 to 1886. An Apache Native called Geronimo was the chief of the culturally related Native American Tribes in the Southwestern United States. The Native Indian tribes fought the nineteenth-century American-Indian war under his guidance.

During the 25-year long battle, the US Army realized that the Native Indian tribes were fierce warriors and skillful strategists. Nana joined the group operating under Geronimo and participated in the forays on Americans and Mexicans. Later, he collaborated with Victorio, another top leader of Apache. He was assisting Victorio during the early part of the 1870s at the Apache reservation situated at Warm Springs, New Mexico.

In an unfortunate turn of events, the United States government evacuated all the Apache people residing at Warm Springs and relocated them to an inhospitable reservation at San Carlos, Arizona. The hostile nature of their new place of living forced them to flee from the area. In 1880, the Mexican army contingent killed Victorio along with many other members of the tribe while fleeing.

During the killings, Nana was not with that group. He immediately took the mantle of leadership of the remaining survivors and began forays on parts of Texas, northern Chihuahua State in Mexico and southwestern New Mexico.


Evading The  US Army

As a result of his terror tactics, the US Army contingent began chasing Nana and his followers. In hot pursuit, the army troops engaged Nana and his 30-40 followers in a two months long chase, trailing them for more than 1600 kilometer throughout New Mexico.

Nana, with his skillful war strategy, became successful in evading the US Army, killing around 30-40 of them in a sporadic fight with them. He won several such battles in spite of the superior numerical strength of the US Army.

On the face of a relentless pursuit by the US Army consisting around 1400 soldiers, Nana retreated to the Sierra Madre mountain of Northern Mexico. However, in 1883, he surrendered to American authority. American General George Crook sent him back to San Carlos reservation along with his many followers.

After some time, he escaped along with Apache chief Geronimo. Both of them fought alongside during the final days of their resistance. In 1886, both of them were recaptured. Taking no risk, General Crook sent them to a prison in Fort Marion, Florida.

In 1894, American authorities allowed Nana to come to Fort Sill, Oklahoma, an Apache reservation. On May 19, 1896, he breathed his last capping the longest fighting career of any such Apache warriors ever.