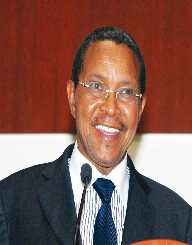 Jakaya Kikwete started his education at Karatu Primary School. Later he moved up to Tengeru School. Jakaya Kikwete completed his O-levels at Kibaha Secondary School before he attended the University of Dar es Salaam. He graduated in 1975 with a bachelor's degree in economics.

Much of Kikwete's leadership skills are credited to his service in the military. Jakaya Kikwete went through training from 1972 to 1976. He served in the Tanzanian Army and was promoted up to the rank of Lieutenant Colonel. His roles in the Army were both militaristic and political.

The next year, Jakaya Kikwete was appointed as the Minister of Foreign Affairs and International Cooperation. His service for ten years made him the longest-serving foreign minister in the country's history. Jakaya Kikwete ran for president of Tanzania in 2005. Jakaya Kikwete won the election and continued to help the people of his country as well as his African neighbors. From 2008 to 2009, Jakaya Kikwete also served as the chairperson of the African Union.

Jakaya Kikwete married Salma in 1989. The couple has eight children as well as one who was adopted. It is his second marriage.

Since Jakaya Kikwete was established as president of the country, Jakaya Kikwete has worked to be approachable. Jakaya Kikwete also made a positive impact on the lives of the Tanzanians. Under his leadership, inflation dropped. Jakaya Kikwete helped the national economy grow while removed foreign debt. The Kikwete Bridge across the Malagarasi River is named after him as well a 12-kilometer highway and many facilities.

As an avid basketball fan, he has been a patron of the Tanzania Basketball Federation.