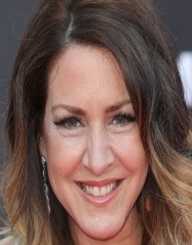 Joely Fisher was born on October 29th, in 1967. She is a talented actress and a singer. Fisher earned her fame after featuring in Ellen an ABC sitcom.

Joely Fisher was born on October 29th, in 1967. Her place of birth was in Burbank, California. She is the first born child to Eddie Fisher, who is also a celebrated singer. Her mother, Connie Stevens was also an actress. Fisher’s younger sister is called Tricia Leigh Fisher.

Joely Fisher went to Beverly Hills High School and after joined Emerson College situated in Boston. She also went to Paris where she studied for one semester at the University of Paris.

Joely Fisher debuted on screen with her role in Pretty Smart -1987. In this film, her sister Tricia played the lead role. After this, Fisher featured in Dedicated to the One I Love -1991. Three years later, she landed on another part in I’ll Do Anything -1994. Here, she played alongside Nick Nolte who was the starring.

Other roles followed both in film and on TV. Some of the TV shows that she featured in include Growing Pains, Blossom, The Golden Palace, Coach, Danny, and Wild Card. In 2005, she landed on the role of Nina Fletcher in the hit series dubbed Desperate Housewives. She only appeared for five episodes in the show.

Later, in 2006, Joely Fisher also earned a name for herself after landing on the recurrent role of Joy Stark in ‘Till Death. She featured on the show for about 81 episodes until 2010. In 2014, she played the role of Wendi in Last Man Standing.

In 1996, Joely Fisher tied the knot with Christopher Duddy. The two have three children together. Aside from raising her children, she also welcomed Duddy’s two sons.