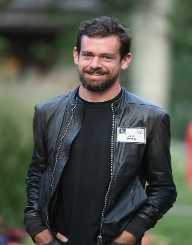 The emergence of social media has made communication and meeting other people very easier. Gone are the days when letters were written to penpals which may take forever to reach the person. However, with a click of a button today, messages can be read and replied in seconds, and this form of modern communication has improved with the inception of social media.

But have you ever wondered those behind the creation of those networks? One of such persons is Jack Dorsey. Born on November 19, 1976, Dorsey is an American computer programmer and internet entrepreneur.

Jack Dorsey. Is one of the brains behind Twitter and also the founder and CEO of the mobile payment company, Square. For his initiatives, he made it to the list of one of the top 35 innovators in the world under the age of 35by the MIT Technology Review TR 35.  He also received The Wall Street Journal Innovator of the Year Award for Technology.

Jack Dorsey was born on November 19, 1976, to Marcia and Tim Dorsey in St. Louis. Raised as a Catholic, he is of an Italian descent. His mother was a homemaker, and his father worked with a company developed mass spectrometer.

He attended the Bishop Dubourg High School and continued to the Missouri University of Science and Technology and later to the New York University where he dropped out. In his ten age, Jack Dorsey was enthused with dispatch routing and subsequently created software in that area some of which are still in use by taxi cab companies. He continued with his dispatch programming until he later moved to California.

After his dropping out of the university, Jack Dorsey.moved to Oakland, California where he brought his interest in dispatch and courier to bear. He has already worked on some software in this area. At Oakland, in 2001, he commenced a company in dispatch courier, emergency and taxi services using the web.  He also worked on networks of medical devices as well as what he terms a "frictionless service market".

Jack Dorsey interest took a new turn after being inspired with how the AOL Instant Messenger Works and thought of coming up with a real-time status/short message communication service which will be web-based and that was the beginning of Twitter. He contemplated on the possibilities of the status of a user being shared easily among another user on messaging software.

He then contacted Odeo’s Biz Stone; Odeo was at the time into text messaging. The two then came out with the prototype of Twitter after working together for two weeks. It was tested on Odeo which then attracted many users and subsequently investors like Evans Williams, the creator of Blogger and Pyra Lab who had left sold his applications to Google.

It all started with the creation of Obvious Corporation co-funded by Stone, William and Noah Glass and Jack Dorsey was made the CEO of the company. Obvious Corporation would later become Twitter Inc. William later in 2008 took over the CEO position and later Dick Costolo also to over. Dorsey became the Chairman but would later on October 5, 2015, return as CEO after Costolo left.

After he took over, he initiated several changes to ensure users stick to Twitter. The 140 character limit allotted for text was maintained by links and photos were not counted as part of the characters. With what he later termed as an internal mistake, Dorsey was on November 22, 2016, suspended from his own Twitter account.

Jack Dorsey ventured into other profitable ventures by developing Square, which through mobile device accepts debit and credit card payments. It was released in May 2010. Coming out as a small square shaped device, it can be attached to a mobile device being iPhone, iTouch, iPad or Android through the headphone jack. Users can then swipe their card and get their transactions done.

The company which started with ten employees in 2009 grew in size and employee counting over a hundred in 2011. According to reports by Business Insider, Square Inc. valued at $3.2million in 2012. The company has since 2015 filed for an IPO to be listed on the New York Stock Exchange. Jack Dorsey. Is the CEO of Square Inc.