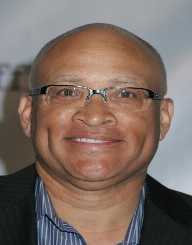 Larry Wilmore was born on October 30th, in 1961. He is famous mostly for his comedic skills. Besides this, Wilmore is also a writer, actor and a producer. With a special interest in his career, he left school to pursue his career as a stand-up comedian. He quickly rose to the limelight as he also worked on coming up with his shows such as The Bermie Mac Show, and The Pjs. The former show earned him an Emmy Award. Wilmore became a household name in 2006 after joining the show The Daily Show. He was the senior black correspondent of the show.

Larry Wilmore was born on October 30th, in 1961. His place of birth was in Los Angeles in California. He is the third born son to Larry and Betty. Wilmore has a brother named Marc who is also a renowned TV personality.

Larry Wilmore went for his high school education at Damien High School where he later graduated in 1979. After that, he joined California State Polytechnic University in Pomona. He did not complete his studies at the institution for he left to pursue his acting career.

Larry Wilmore's acting career quickly took off immediately he left school. During the 1980s, he played many small roles both on TV and in the film industry. In 1983 he appeared in Facts of Life TV series where he played the role of a police officer for two episodes. Also, in the same year, he featured in Good-bye, Cruel World, playing the role of a thug in the film.

His show-business picked off in 1990 after he was part of the writing team for the show called Into the Night. It did not take long before he landed on another writing gig. In 1991, he wrote In Living Color, a comedy sketch show. This work launched his career as it later became a huge hit. Wilmore went on to write and produce sitcoms such as The Jamie Foxx Show and The Fresh Prince of Bel-Air.

Years later, in 1999, Larry Wilmore teamed up with Eddie Murphy to create The PJs. Aside from being the creator of the animated comedy, he also produced it. This was followed closely by The Bernie Mac Show. It was his work in this show that Wilmore earned himself an Emmy Award. After that, he also created and produced other sitcoms such as Whoopi where he worked closely with Whoopi Goldberg.

Larry Wilmore's breakthrough came about in 2006 after being credited as a senior black corresponded for The Daily Show. He mainly reported on sports, pop-culture and general news. His comedic prowess earned him high acclaim and thereby turning the show into a massive success.

With time, Wilmore landed on other acting gigs such as Dinner for Schmucks -2010, Vamps- 2012, Date and Switch – 2014. In the television industry, he featured in Love Bites -2011, Happy Endings, Malibu Country, Instant Mom and recently in The Mayor.

Larry Wilmore's first marriage was to Leilani Jones, an actress. The two lived together for twenty years before divorcing in 2015. He is a proud father of two children from his first marriage to Jones.