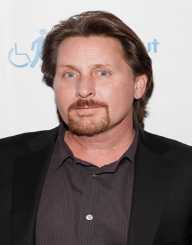 Emilio Estevez is an actor, director, and screenwriter.

Emilio Estevez was in the New York City borough of Staten Island, on 12 of May 1962, to parents, actor Martin Sheen and artist Janet Templeton.  He was oldest in the family; his brothers are Ramon Estevez and actor Charlie Sheen (named Carlos Estevez initially), and sister Renee Estevez.

The family moved to Manhattan’s Upper West Side and studied in private schools once his father became a famous actor.

In 1968, the family moved to Malibu, California and Emilio attended Santa Monica High School, together with the Penn and Lowe brothers.

He used to write and make short films with brother and friends after his father bought a portable movie camera. After graduating from high school, he ventured into acting.

Emilio Estevez’s first job in acting was as an extra in Badlands and Apocalypse Now with his father, Martin. Emilio also wrote and directed short plays in school. During the Eighties, he was credited to be the leader of a group of young actors known as the brat pack.

Emilio Estevez became very famous in the 1980s for being a Brat Packer and was the leader of the group of nine young actors. Emilio’s first role was in a drama produced by the Catholic Paulist order.

Then he appeared alongside his father in Mister Roberts. After that, the duo appeared in Custody of Strangers, a 1982 film about juveniles in jail.

In 1982, Tex was the book adaptation film that propelled Emilio Estevez into stardom. The next year, he appeared in another adaptation, The Outsiders. The film became a cult classic and made him and other actors such as Matt Dillon, Patrick Swayze, Tom Cruise and Ralph Macchio, famous.

Emilio Estevez was the lead actor in Repo Man. His career high was filming The Breakfast Club in 1985. In 1990, he and brother Charlie Sheen appeared together in Men At Work; it was the first of many movies.

Apart from films and television, Emilio Estevez also appeared in music videos. He is a close friend of Jon Bon Jovi and had appeared in Blaze of Glory as Billy the Kid and Say It Isn’t So.

Emilio Estevez directed his film debut Wisdom in 1986, making him the youngest person to produce a major motion picture from writing to starring in his work. After his acting career, Emilio moved onto writing and directing films since the early 2000s.

Emilio Estevez directed Cold Case, CSI: NY and Close to Home in television, but wrote many unproduced screenplays. Emilio almost went broke when writing, directing and producing Bobby, which was released in 2006. The Way was a drama, starring his father, Martin Sheen.

In total, he has thirty-four films under his name, either as a director or actor.

Emilio Estevez won a Hollywood Film Award for Bobby as Ensemble of the Year, and the Biografilm Award in Venice Film Festival for the same movie in 2006.

Emilio Estevez dated Carey Salley, and they had a son Taylor and daughter Paloma together. The pair broke up in 1986. He then was briefly engaged to Demi Moore. He married Paula Abdul in 1992, but the marriage only lasted two years due to differences in expectations.