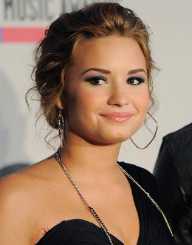 Demi Lovato was born on August 20th, in 1992. Her place of birth was in Albuquerque, New Mexico in the United States. Right from the time she was young, she showed her unique contribution both to the music and in the film industry. She began acting while she was a child and made appearances in TV series such as Barney & Friends. After this, she featured in Disney Channel series TV show, i.e., As the Bell Rings. This opened up the doors for her as she began landing important roles such as in the 2008 film Camp Rock. While the movie was screened, Lovato took this opportunity to record music tracks that were to be used in the movie. This was followed by several other releases in the following years. In 2009, she landed another role in Disney show called Sonny with a Chance. In 2012, Lovato was featured in X-Factor series as a judge.

Demi Lovato was born on August 20th, 1992 in Albuquerque, New Mexico. Her father was called Patrick Martin Lovato. He worked as an engineer and was also a musician at the same time. Her mother, Dianna De La Garza was a former cheerleader for the Dallas Cowboys. Two years later after Lovato was born, her parents separated.

With time, Demi Lovato began acting, and her first TV appearance was in 2002. She was playing the role of Angela in the Disney show called Barney & Friends. Around this time, she also began experimenting with musical instruments such as the piano and the guitar. When she was seven years old, she was playing the piano. At the age of ten, she had learned to play the guitar. Dancing and acting were also some of the activities that she indulged into as part of her early career.

In 2007, Lovato earned herself a small role in another TV show called The Bell Rings. This show was short-lived, but a bigger project was coming for Lovato as she landed a lead role in the Disney movie Camp Rock. Things began to turn around in her career. While shooting scenes for the Disney movie, she also turned to music as she recorded music tracks that would be used in the movie. In 2008, she acted alongside Selena Gomez in Princess Protection Program. Soon, another new series on the Disney Channel came up in 2009 and Lovato was still the main actor. This show was called Sonny with a Chance, and it turned Lovato into a nationwide star. The show came to an end after three years of being aired.

In 2008, Demi Lovato worked with the Jonas Brothers, a pop group that helped her in recording songs to be used for Camp Rock movie soundtrack. During this time, she released her first official album Don't Forget. The album was a hit, and it was ranked as No.2 on top 200 Billboard. With the success of her first album, she went on a tour with the pop group with the main intention of promoting the album.

It did not take time before Lovato released her second album, Here We Went Again in 2009. The title track of the album performed well as it landed her on Billboard top 20 lists. This was an achievement for her as she had never attained such while singing her singles. After this, she also took a tour that would promote her songs. The Jonas Brothers tagged along with her on this second tour. Joe Jonas, one of the Jonas Brothers, got romantically involved with Demi Lovato.

Lovato went platinum in 2011 with the release of the album Unbroken. The song that was classified as a platinum hit in the album was the "Skyscraper."

Later on in 2012, she starred alongside Britney Spears while judging music contestants on the X-Factor TV series. With time, the show got canceled, and Lovato was back on TV while featuring on Glee.

Demi Lovato has been in relationships with celebrities such as Trace Cyrus and Joe Jonas.