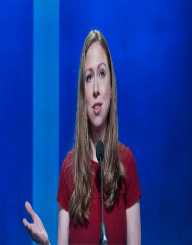 Chelsea Clinton was born on February 27th in 1980. Her place of birth was in Arkansas, Little Rock in the United States. Chelsea’s youth revolved around her being a public figure. This was because she was the daughter of President Bill Clinton. She remains in the public sphere as her mother, Hillary Clinton later became the secretary of state. She attended Stanford University after which she then became an NBC News newspaperwoman. She strongly advocates for women’s rights in the society.

Chelsea Clinton was born in 1980, and she is the only daughter of the former president Bill Clinton and Hillary Clinton. Her mother is a former U.S. Secretary of State. She is also a 2016 presidential candidate. The name ‘Chelsea’ came about as a result of Joni Mitchell hit song called “Chelsea Morning.”

At the time when Chelsea was born, his father Bill Clinton was serving his first term as Arkansas governor. Her mother was an attorney. Hillary Clinton worked as a partner in a firm called Rose Law Firm, in Little Rock. In spite of the family’s busy schedule, Chelsea formed an essential part of their lives as they saved time for her. Her father had a small desk for his daughter where they would take breakfast together every morning.

Hillary also took the pleasure of interrupting her busy schedule to spend time with her only daughter. If she was away on business trips, she made sure that Chelsea got her loving messages while she attended Forest Park Elementary School.

With the kind of success that her parents had, they also pushed her to work hard in her career. By the time Chelsea Clinton was 11 years, she had learned the trick of investing in the stock market. She chose to be a vegetarian after learning of the adverse effects that come with red meat.


Years At The White House

In early 1993, Bill Clinton’s inauguration was on 20th January that year. This was the time when Chelsea moved to the highly respected White House in America. The secret service codename that she was given upon their shifting was “energy.” Her parents tried their best to make sure that Chelsea Clinton was away from the public limelight. In spite of this, Chelsea is the daughter of the First Family was still ridiculed more so for her appearance. What Chelsea’s parents wanted for their daughter was for her to experience a healthy life, just like other daughters out there.

Chelsea went to Sidwell Friends School, and science and history classes were her favorite. She also went to Washington School of Ballet for her ballet classes.

The First Daughter had the vision of enrolling for pre-med, and this made her enroll at Stanford University. Her romantic relationships were always a topic of focus because she was the daughter of the President. Complications mounted when she was in her second year. This was after rumors were out that her father, the president, was having an affair with Monica Lewinsky, an intern at the White House.

Family matters were not the only issues that she had to deal with in her college years. In addition to the problems that were going on, Chelsea’s school schedule was also tough on her. She later changed courses as she took history as her major, leaving behind medicine. She worked on her thesis project titled: the Northern Ireland peace process. After this, she went on to Oxford University where she did her masters.

Immediately after her graduation, Chelsea Clinton joined McKinsey & Company located in N.Y. She became the youngest to be hired in the company’s history. She worked with the consulting firm for three years before switching gears to Avenue Capital Group.

In 2009, Chelsea announced publicly that she was engaged to Marc Mezvinsky, an investment banker. The two were married months later in July 2010. One year then, she joined NBC and worked as their correspondent. After working with them for four years, in 2014, she left the group to engage in family business.

During the same year in April, Chelsea Clinton got pregnant with her first child and that also she announced this publicly. Hillary Clinton was excited about the fact that she was going to receive her first grandchild. Clinton and Mezvinsky named their firstborn Charlotte Clinton Mezvinsky. This was followed closely by their second born son called Aidan Clinton Mezvinsky.